Diminishing odds of a BoC rate hike in January: BMO

There’s a growing chance the Bank of Canada is done raising interest rates.

Governor Stephen Poloz’s effort this week to dilute his previous enthusiasm about the economic outlook is prompting some analysts to ask whether his rate-hiking cycle is already over after five increases since the middle of 2017.

As oil falls and a potential U.S-China trade war threatens the global expansion, investors are fully pricing in just one more increase from the Canadian central bank over the next two years. It would only take a small disappointment -- economic growth falling slightly below 2 per cent, for example -- to eliminate even those chances.

“My bet is the BoC is done, period,” David Rosenberg, chief economist and strategist at Gluskin Sheff + Associates Inc., told clients in a report this week.

What’s changed is that Poloz no longer sounds as confident as he once did about whether the economy is running into production constraints that would risk fanning inflation, which is already at the central bank’s target. Instead, data revisions by Canada’s statistics agency show there may be more excess capacity in the economy than previously thought.

The country’s expansion also might not be as strong as anticipated. The oil-price collapse, coupled with the Alberta government’s decision to order production cuts, will keep Canada’s growth rate tracking below 2 per cent over the final three months of this year and into the first quarter of 2019, according to the latest estimates from economists. 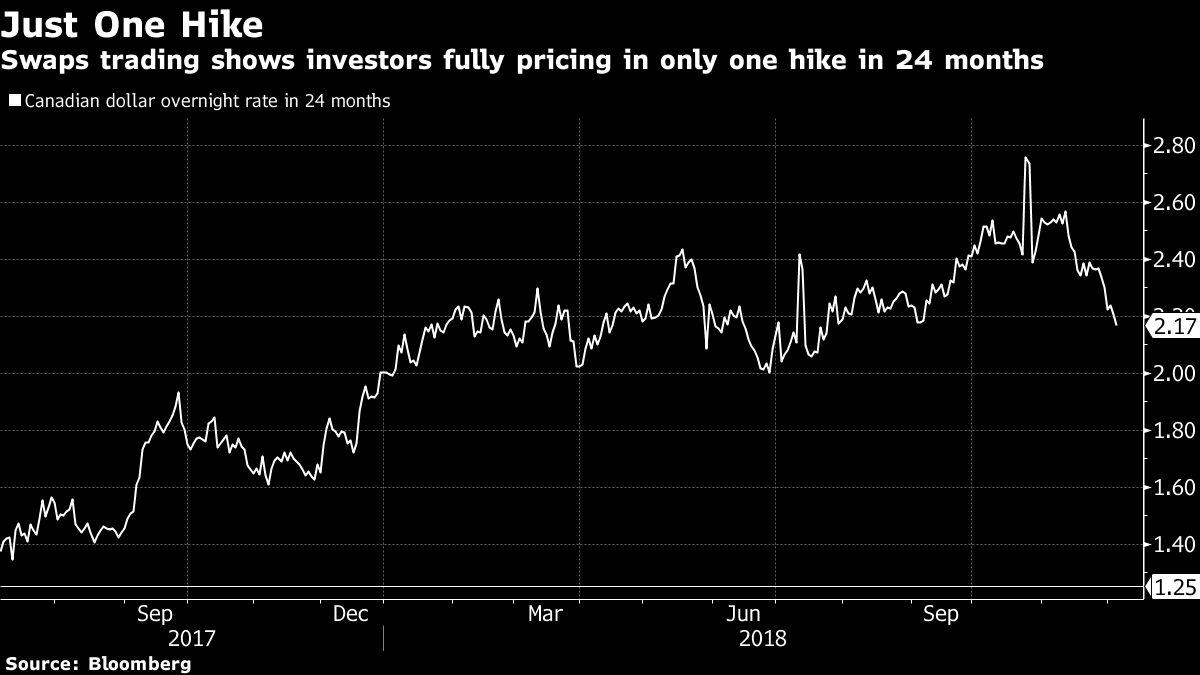 If the economy begins to trend lower after that -- possibly because of continued disappointment in business investment outside of energy -- the need for hikes will fade, according to Avery Shenfeld, chief economist at CIBC World Markets.

“If growth is below 2 per cent and is not accelerating, the Bank of Canada should not be raising interest rates because the object of the interest rate hikes was to moderate growth to a bit under 2 per cent,” Shenfeld said by phone.

Poloz remains hopeful he won’t be knocked off his hiking path. In its Wednesday statement holding rates rates steady, the Bank of Canada suggested temporary factors were at least partly at play because of last summer’s heightened uncertainty around trade negotiations with the U.S., and spending outside of the energy sector is expected to strengthen now that the two countries came to an agreement along with Mexico.

In a speech Thursday, Poloz reiterated his belief the central bank will eventually need to bring the current 1.75 per cent policy rate back into a “neutral range” of somewhere between 2.5 per cent to 3.5 per cent -- citing the backdrop of low unemployment, inflation close to target and an economy that is operating close to capacity.

Investors aren’t convinced, extending to an eighth straight session on Thursday the drop in yields on Canada’s two-year notes, which are now below 2 per cent for the first time since July. Odds of a rate hike at the next decision in January are down to 10 per cent.