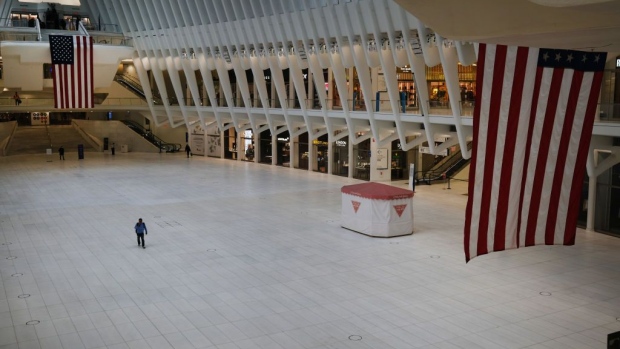 NEW YORK, NY - MAY 08: The Oculus transportation hub and mall stands nearly deserted in lower Manhattan as the coronavirus keeps financial markets and businesses mostly closed on May 08, 2020 in New York City. The Bureau of Labor Statistics announced on Friday that the US economy lost 20.5 million jobs in April. This is the largest decline in jobs since the government began tracking the data in 1939. (Photo by Spencer Platt/Getty Images) , Photographer: Spencer Platt/Getty Images North America

(Bloomberg Opinion) -- In the first few months of the Covid-19 pandemic, the conventional wisdom was that economic recovery hinged on controlling the disease. For a while, that appeared to be the case, with the economies of most states feeling similar levels of pain as consumers, businesses and public officials took measures to slow the spread of the virus.

But as August state employment data show, recovery is happening faster in states whose economies are less tied to in-person services, not states that have performed better on controlling the virus. As we await the rollout of vaccines, we should expect better virus control to improve the economic fortunes of any community. But we should also expect states with economies that rely more on logistics, manufacturing and construction to outperform economies heavier on services, no matter what their public health performance is.

The best way to see this is to compare the unemployment rates of states that have done some of the best and worst jobs of containing the spread of the virus over the past couple of months.

Since the pandemic began, states in the Northeast have consistently done the best job of containing the virus through a mix of policy measures and adherence to wearing masks (and possibly, in the case of a few hard-hit communities, partial herd immunity). Yet of the 10 states with unemployment north of 10% in August, half are in the Northeast — Massachusetts, New Jersey, New York, Pennsylvania, and Rhode Island.

When thinking about states that did a poorer job of containing the virus over the summer, those in the Sun Belt such as Arizona, Texas, Florida, and Georgia come to mind. All experienced a surge in cases in June and July that strained hospital capacity, and some had to reverse course on economic reopening plans and take measures such as shutting or restricting the operations of bars and indoor restaurants. Yet in August, Arizona's unemployment rate was 5.9%, Florida’s was 7.4%, Georgia’s was 5.6%, and Texas’ was 6.8%.

Thinking about how this could be, it helps to look at four of the other states with unemployment rates over 10% in August, which have a mixed record on virus containment — California, Hawaii, Illinois, and Nevada. All have tourist destinations reliant on air travel — Disneyland, the beaches of Hawaii, the casinos of Las Vegas, the major city of Chicago.(1) These states also have large cities where in-person activities have been curtailed the most — Los Angeles, San Francisco, and again Chicago.

What’s happening is that the bifurcated industry recovery patterns we’ve seen nationally are playing out between different states and communities.

The economies of Arizona and Texas, for example, have gotten a boost from housing construction, which has been among the first industries to recover nationally.

The pandemic boom in e-commerce has been good news not only for companies such as Amazon and Shopify, but also for workers and communities with lots of workers fulfilling those orders, either in warehouses or in ground transportation. The employment search engine company Indeed notes that driving jobs and loading and stocking jobs have actually shown year-over-year growth in help-wanted ads.

Meanwhile, factory activity has improved lately as companies have sold down their inventories, creating shortages. Supply chains still have problems, and factories need to change their operations to account for coronavirus, but this trend is lifting the fortunes of communities tied to the production of goods.

On the other hand, air travel in the U.S. is still only at 30% of normal levels. Business travel and major conferences remain dormant. Georgia may have one of the lower unemployment rates in the country at 5.6%, but Delta pilots and flight attendants only get paid when there's demand for air travel. The hotels and restaurants in downtown Atlanta that rely on conventions and business travel are struggling as much as their equivalents in Midtown Manhattan.

No city or state will get back to normal until there's a vaccine. But different industry makeups of different states (along with different attitudes toward risk among individuals, businesses, and public officials) is driving different economic outcomes right now.

While economies in the Northeast and California may remain in a depression well into 2021, parts of the rest of the country are transitioning into more of a modest recession. Geography has become just one more way in which we're experiencing a K-shaped recovery.

(1) Florida obviously has many tourist destinations dependent on plane travel. But its other Sun Belt characteristics may cancel that out, and traveling to the beach by car is still pretty doable in a pandemic.