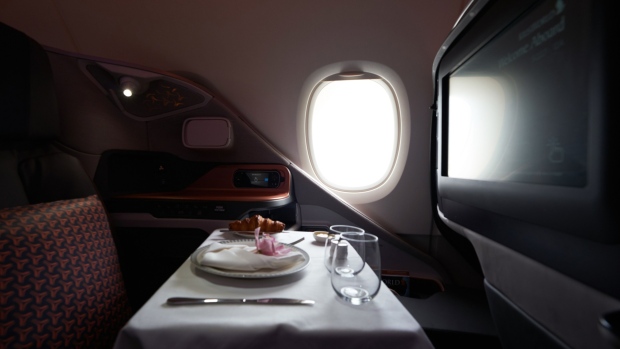 A breakfast table is prepared for a business class seat of a Singapore Airlines Ltd. Airbus SE A380 aircraft. , Nicky Loh/Bloomberg

When Singapore Airlines Ltd. said seats on its superjumbo-turned-restaurant sold out in 30 minutes, one common question was: “Who on Earth would want to do that?”

Plenty of people, it turns out. For every person who doesn’t relish flying, let alone schlepping to the airport and onto a parked plane for some reheated airline food, there’s another who can’t get enough of the aviation experience and is willing to shell out (big bucks) for it.

Singapore Airlines is opening up two of its Airbus SE A380s at Changi Airport as temporary restaurants for two weekends later this month, offering dishes from its menu, two complimentary alcoholic drinks and free flow of other beverages. A meal in a suite costs S$642 (US$472), while prices are S$321 for a business-class seat, S$96.30 for premium economy and S$53.50 for economy.

At the top end, that sort of money would easily buy you an eight-course degustation at Odette, consistently ranked as one of the world’s best restaurants, or a dinner for two, plus wine, at Cut, the Marina Bay Sands steak house that’s part of celebrity chef Wolfgang Puck’s stable.

Mayur Patel was willing to apply for the sweet suite seat. The regional sales director for travel data provider OAG Aviation Worldwide said he wanted to experience the suite again after flying in one once from Sydney to Singapore. As a member of Singapore Airlines’ top-tier Solitaire PPS Club for 21 years, Patel also wanted to support the carrier because he feels attached to the brand.

Here are some more of his insights into what attracted people to the offer:

What motivates people to spend hundreds of dollars on this when they could go to a 5-star restaurant or hotel in town?

What does Singapore Airlines get out of it?

Any idea of the most popular class of seating?

Oh, and Patel didn’t get his suite in the end.