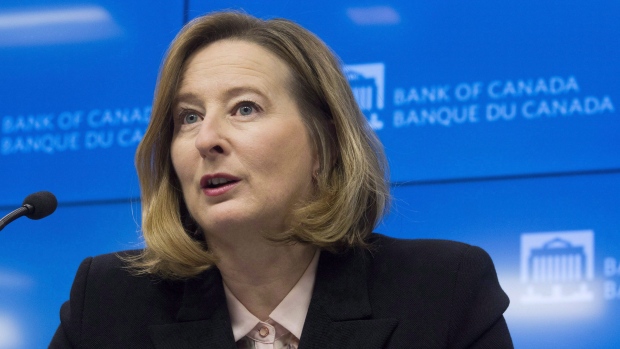 The Bank of Canada’s No. 2 official said one of the lessons of the current pandemic has been to highlight the limits of monetary policy “solving all problems” in a world of low interest rates, as the central bank studies potential changes to its 2 per cent inflation target.

Speaking at a workshop organized by the Bank of Canada on its mandate renewal next year, Senior Deputy Governor Carolyn Wilkins said the future challenges for central banking have become “crystal clear” in recent months as the world economy navigates the crisis -- low interest rates diminish the central bank’s ability to combat future downturns, while also encouraging households to take excessive risks.

That means fiscal policy will need to play a significant role stimulating growth, Wilkins said. It also means regulatory policies need to step up to counter any buildup in financial vulnerabilities as the central bank keeps borrowing costs low to drive the expansion.

“Central banks are likely to run out of conventional firepower if we see an economic downturn in a low-interest-rate world,” Wilkins said in remarks opening up the conference, which is taking place virtually. “Another challenge is that long periods of low interest rates encourage investors to take on risk that may be excessive. We see that now with high levels of indebtedness, not only in Canada, but around the world.”

Options under consideration include adjusting policy to make up for periods of below-target inflation, nominal gross domestic product targeting, raising the target or some type of dual mandate that includes employment. Wilkins said the central bank has been doing a side-by-side assessment of alternatives to its inflation targeting regime, with some results due to be released on Wednesday.

“So far, we’ve identified some of the strengths and weaknesses of the different frameworks,” Wilkins said. “But at this point, no single framework dominates on all margins.”

The central bank is also looking more closely at its toolkit, and how monetary policy interacts with fiscal levers, she said.

Wilkins said the current mandate has fared well during the pandemic, claiming the simple nature of the 2 per cent target has been “golden,” letting “businesses and families know what we aim to achieve with our actions.” She also noted the mandate provides flexibility to the central bank, giving it scope to slow inflation’s return to target if needed.

But policy makers are also becoming increasingly cognizant of the limits of monetary policy. Not only does that highlight the need for fiscal policy to stimulate growth, but also how the Bank of Canada may be ill-equipped to deal with issues such as rising financial vulnerabilities at a time when it needs to support growth.

“Our focus must be on the macro economy to support sustainable growth and price stability,” Wilkins said. “In the current context, coming out of such a severe hit to jobs and economic activity, the Bank must keep its eye on the ball.”

She also said the central bank is looking at ways to improve the consumer price index measurement, which has lagged behind what average consumers perceive in terms of inflation.

“It’s critical that we measure inflation as accurately as possible so Canadians have confidence in our target,” Wilkins said. “And we must address public perceptions in our analysis and communications.”