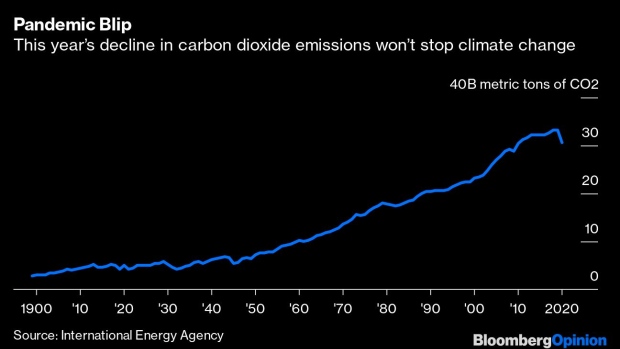 (Bloomberg Opinion) -- Covid-19 has been simultaneously good and bad for humanity’s struggle to limit global warming. So far, it’s hard to say what the net balance will be. But the European Union could tilt it positive, if it so chooses.

On the good side of the ledger, global emissions of greenhouse gases plummeted during the lockdowns. On the bad side, they’re already heading back up to pre-corona levels. This year’s dip will make us no more likely to achieve our goals for slowing climate change.

The recent drop in demand for energy also had perverse side-effects. The price of oil plummeted, making this fossil fuel more attractive in the recovery compared to greener alternatives. Even the damper on air travel hasn’t been unequivocally good for the climate. As airlines bought fewer emission allowances in the EU’s cap-and-trade system, the price of these certificates dropped. This made carbon pollution cheaper in other sectors of the economy, such as cement production.

The pandemic’s effect on climate politics is also ambiguous. Just before the coronavirus arrived in Europe, Ursula von der Leyen, president of the European Commission, had declared decarbonization the EU’s priority, with a “Green Deal” to make the whole bloc emissions-neutral by 2050. Later today, she’ll probably announce even more ambitious targets.

But the Covid-19 recession has pushed ecology down a notch in urgency, below economics. The Czechs, Poles and others have suggested shelving the Green Deal to concentrate first on limiting the economic fallout of Covid-19. The fight against global warming, in their logic, amounts to a huge exogenous cost which cannot be borne during a depression.

Other politicians disagree. Von der Leyen, for example, is trying to market this week’s acceleration of the Green Deal as a twofer: The huge public and private investments required for decarbonization, so goes her pitch, will simultaneously provide the fiscal stimulus to boost aggregate demand and overcome the corona recession. Thus, Europe’s rescue packages are designed to be “green” (see chart).

But economists aren’t convinced that these two concurrent struggles — against recession and against global warming — are natural policy partners. The “Tinbergen rule,” named after a Nobel laureate in economics, says that if you have N different policy goals, you require at least N different policy instruments, otherwise there will be trade-offs and conflicts.

For example, limiting climate change requires raising the price of carbon. But this also means higher energy costs, which dampen the recovery. Subsidizing green products, like electric cars or fuel cells, implies even more public borrowing at a time when government debt is already high, and therefore requires tax hikes sooner rather than later, which will hurt demand. And so on.

But there’s a solution, and it’s one the EU should grasp and then evangelize all over the world. It’s to stop subsidizing things labelled green with public money, and to instead focus entirely on charging a price for things that are brown, then recycling the money that’s earned.

As it happens, the appropriate instrument already exists. It’s that aforementioned European emissions-trading system, the world’s largest of its kind. It fixes the amount of carbon that certain industries, such as steel makers or power generators, may emit. Companies then have to buy allowances, which they can resell to other firms if they don’t need them.

Earlier this year, I argued that using this kind of price signal is the most “liberal” and efficient way to reduce emissions, because individuals and firms are free to adapt however they wish. During the coronavirus outbreak, I then suggested that the EU should grab this opportunity to expand its emissions-trading system to the whole economy. It currently only covers sectors that account for about half of Europe’s emissions. Now is the perfect time for von der Leyen to apply it to all industries.

Such a scheme could also help pay for a broader recovery. Economists Clemens Fuest and Jean Pisani-Ferry have proposed using the revenues from the EU’s emissions-trading system as a new funding source for the EU itself. At present, the EU is financed mainly through national contributions by member states, and revenues from selling carbon allowances go back to individual countries.

If the carbon revenues instead become EU funds, they can be used to repay the bonds soon to be issued by the bloc to fund the huge recovery program called Next Generation EU. This way the money is taken from polluters and recycled into stimulus. Both policy goals are brought into harmony — and the EU is one step closer to solving its institutional problems.

The EU must then steadily decrease the number of carbon allowances, encouraging companies to emit ever less. Of course, the EU and the U.K. together account for only about 10% of worldwide emissions. So bringing down global emissions will require others, above all China and the U.S., to decarbonize too.

The EU should therefore make its emissions-trading system open to all countries. Companies from states that don’t participate will have to pay so-called carbon border adjustments when exporting to the EU. The long-term goal is a cap-and-trade system that spans most large economies in the world, and leads to one global carbon price, which is high and rising. It won’t be easy. But it may be our best shot at saving the planet.

Andreas Kluth is a columnist for Bloomberg Opinion. He was previously editor in chief of Handelsblatt Global and a writer for the Economist. He's the author of "Hannibal and Me."