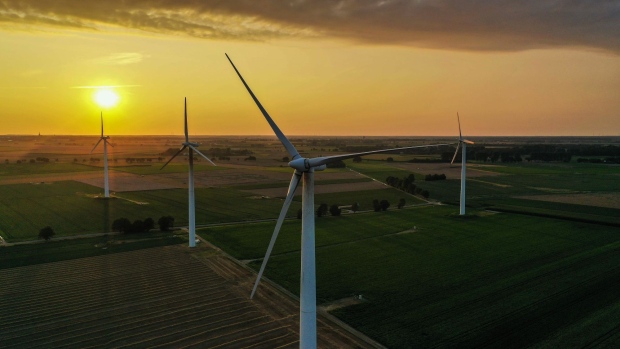 Wind turbines operated by RWE AG during sunset in Rheinisches Revier, Germany, on Wednesday, Aug. 11, 2021. A report from the world’s top climate scientists warned that the planet will warm by 1.5° Celsius in the next two decades without drastic moves to eliminate greenhouse gas pollution. Photographer: Alex Kraus/Bloomberg , Bloomberg

The factory will be able to produce turbines with the power capacity of at least a gigawatt each year, and will also supply components and parts to European buyers, Ming Yang Vice President Ye Fan said in an interview. The aim is to start building the plant, probably in south Germany, within three years, he said.

Ming Yang’s facility will be first major wind equipment manufacturing hub built by a Chinese company in Europe, although some of its domestic rivals already have a presence in the region. Xinjiang Goldwind Science & Technology Co. has a majority stake in German turbine manufacturer Vensys Energy AG and Envision Energy Co. has a research center in Bristol, U.K.

China’s top wind turbine makers, which account for around 60% of global production, are vying to enter Europe as authorities there strengthen pollution reduction goals. The global offshore wind sector is poised to grow more than 10-fold over the next 15 years, with Europe making up a large chunk of expansion in the near term, according to BloombergNEF.

Chinese wind turbine manufacturers now account for 63% of offshore wind installations globally and 59% of those onshore, according to BNEF.