Clean energy has a dirty secret.

While the industry is welcoming more women leaders, its rank-and-file workforce is still a lot like those at fossil-fuel companies: white and dominated by men. The lack of gender diversity is being driven by manufacturing jobs, and that means women are now missing out on the biggest jobs boom America has to offer.

Solar installer and wind-turbine technician are the two fastest-growing professions in the U.S., projected to rise more than any others through 2026. One in every 50 new positions created in the U.S. involved solar in 2016, and clean power now accounts for about a third of all employment in the energy sector.

“I have about 170 people on site at this project down in South Texas, and I think I have close to 10 per cent female,” said Kim Smith, a 56-year-old vice president of construction for the Spanish renewable energy developer Acciona SA. “It’s nowhere near enough. What would be enough? Enough would be 50-50.”

In terms of leadership, progressive-thinking clean power companies are breaking the mold in the energy industry, where an old boys’ club culture has long reigned. Almost a quarter of regulated electric utilities in the U.S. are now run by women -- three times their representation in the Fortune 500 by percentage. The picture looks different when the overall workforce is considered. 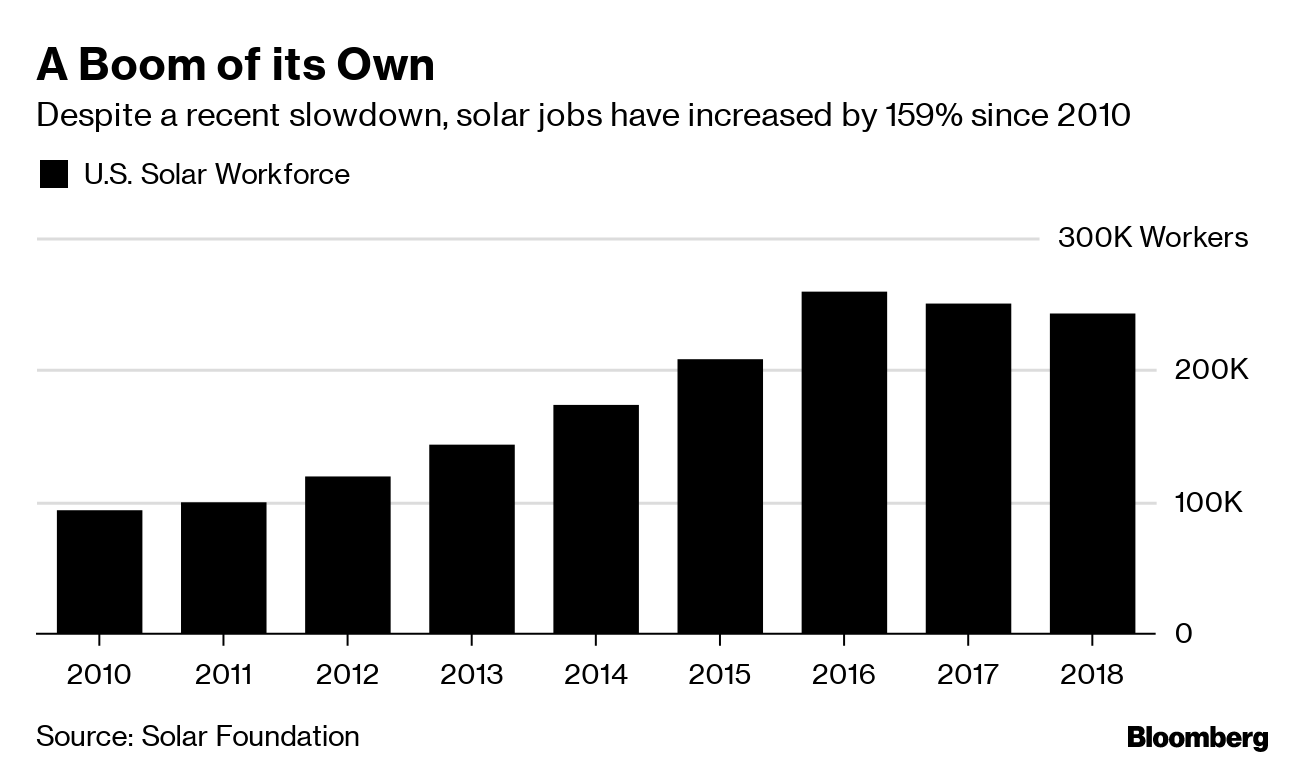 By Brookings Institution’s count, the renewable power generation business is even less diverse than the fossil-fuel production industry, with women accounting for 13% of the U.S. workforce. In Europe, women hold less than a third of renewable energy manufacturing jobs and are largely employed in lower-skilled and administrative jobs. The breakdown is similar in Asia.

The seeds for the gender imbalance is seen as having been sown years earlier by a culture where boys get toy trucks, girls get dolls and the former are encouraged to study science, technology and engineering more.

By the time women go to college, they’re gravitating toward consulting and project management rather than traditional construction jobs, said Remy Pangle, director at James Madison University’s sustainable energy division. “How do you get girls interested in things that are more interesting to boys,” she said, “without having to make your LEGOs pink?”

A study by the International Renewable Energy Agency released this year showed women account for 45% of the industry’s administrative jobs but only 28% of its math, science, technology and engineering ones.

Acciona’s Smith calls herself “lucky” because she grew up helping her father and uncle with their small construction company. She fears her teenage nieces will shy away from jobs like hers.

That’s what prompted her to write a letter to the Chicago Tribune in March. “We need to excite girls even younger,” she wrote. “Let them know their lives don’t have to be spent behind a desk. They’re needed in the field.”

For women already in the industry, the going isn’t easy. At a time when the #MeToo movement is raising awareness about gender-based discrimination everywhere from Hollywood to Wall Street, Jamie Yarmoff -- a 24-year-old project manager for power generator AES Corp. -- says the renewable industry too needs to change.

She recalls being a construction manager on a solar project and having to make multiple requests for plans from a contractor. She never received a response, and the information was instead being sent to one of her male colleagues, according to Yarmoff.

“I have to go further than my male counterparts to prove the same worth, because otherwise, why should they listen to me?” she said. AES said in a statement that it’s advancing diversity and inclusion throughout the entire company.

As for wages, men earn 26 per cent more than women in the the U.S. solar business -- at all position levels -- a joint report by the Solar Foundation and Solar Energy Industries Association shows. “We have a responsibility to create cultural change and address the systemic forces that have allowed discrimination to fester,” said Abigail Ross Hopper, SEIA’s president and CEO. “It’s imperative that we take proactive steps to advance these issues, because it isn’t going to happen on its own.”

In Asia, most of the female leaders at clean energy companies didn’t “earn” their positions, said Molly Huang, executive secretary of the group Women in Renewables Asia. Instead, “it’s like a family business, and they are wives, daughters and family members of the board,” she said. “The ultimate goal is to improve the hiring process to include more women in clean energy.”

Kristen Graf, who runs a New York-based group representing women in renewable energy, cautions that lack of diversity is so pronounced that even those getting into the field can feel alienated.

“Unfortunately, this is the case in a lot of places where there’s one woman on the site -- that sense of isolation in the mix,” she said. “Even if you’re that woman who loves hanging out with the guys and fits in, is incredibly good at your work and loves that space, it still can be an isolating feeling. So how do you stay in it and stick with it?”

--With assistance from Ewa Krukowska and Aaron Clark.