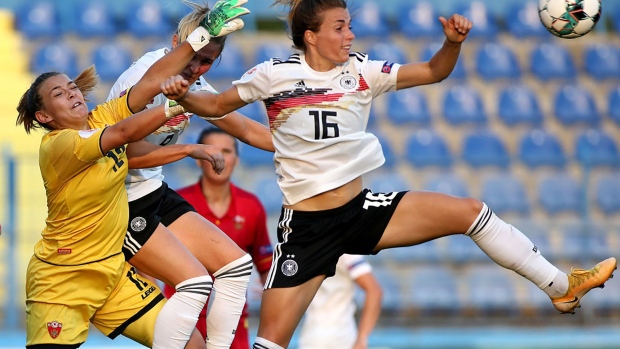 Ivana Cabarkapa of Montenegro with Sandra Starke of Germany during the UEFA Women's EURO 2022 Qualifier match between Montenegro and Germany at Pod Goricom on September 22, 2020 in Podgorica, Montenegro. , Photographer: Filip Filipovic/Getty Images Europe

The prize money for the 16 teams taking part in Europe’s elite women’s international soccer competition, the UEFA European Championships, is to double to 16 million euros (US$18.8 million), according to a statement from UEFA Thursday.

Although an increase from previous years, payments to the womens’ game are a tiny fraction of the riches shared by men’s teams.

Clubs that supply players to the women’s tournament, which is being held in England next summer, will also receive 4.5 million euros to reward them for releasing the players for the event.

The UEFA statement also stated that the expected revenue from the next European Champions League, a competition of men’s club teams, will be 3.5 billion euros.