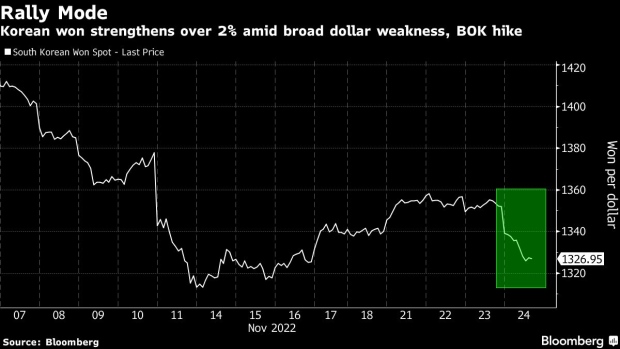 Bundles of 50,000 won and 10,000 won banknotes arranged at the Shinhan Bank headquarters, a unit of Shinhan Financial Group Co., in Seoul, South Korea, Sept. 14, 2022. Policy makers in Asia pushed back against a surging dollar, seeking to stem losses as their currencies teetered on the brink of key levels that may trigger more selling. Photographer: SeongJoon Cho/Bloomberg , Bloomberg

(Bloomberg) -- The South Korean won surged after the nation’s central bank raised its policy rate and indicated the tightening would continue until inflation is under control.

The won jumped as much as 2% to 1,324.90, marking its biggest advance since Nov. 11, when the currency rose nearly 5%. It led the gains in the region as most emerging-market currencies strengthened against the dollar after the minutes of the latest Federal Reserve meeting showed support for smaller rate hikes.

While concerns grow over the impact of higher interest rates on the economy and credit markets, Bank of Korea Governor Rhee Chang-yong indicated the central bank would stay on its rate-hike path in the near-term.

“The governor being open to hikes compared to the Fed that is slowing down,” is seen driving risk appetite, pushing the won higher, said Mingze Wu, a currency trader at StoneX Group in Singapore. Wu expects the currency to stay supported should the Fed resort to a smaller 50 basis points hike in December.

The won has climbed almost 8% against the dollar this quarter, the biggest jump among major Asian currencies, amid expectations for softer rate increases in the US and China’s pivot away from its Covid-Zero policy. That is a dramatic shift from being the worst-performing currency among the same peers last quarter.

During a press briefing that followed BOK’s decision to increase its benchmark rate by 25 basis points to 3.25%, Rhee said there were two members on the board who wanted to keep the door open to rates rising beyond the 3.5% level, a position that suggests rates could keep going up in the future.