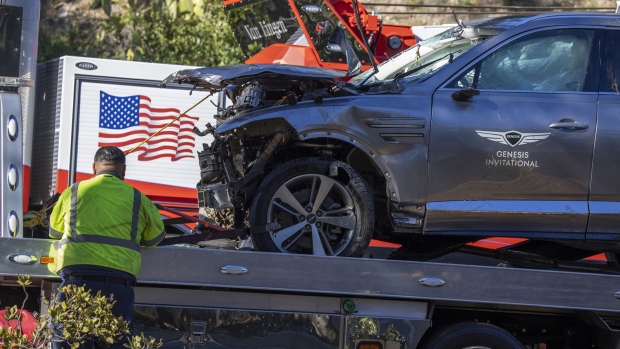 ROLLING HILLS ESTATES, CA - FEBRUARY 23: A sign for the Genesis Invitational golf tournament is seen on the door of the car that golf legend Tiger Woods was driving when seriously injured in a rollover accident on February 23, 2021 in Rolling Hills Estates, California. Rescuers used hydraulic rescue tools to extricate him from the car where he reportedly sustained major leg injuries. Law enforcement reports that there was no evidence of impairment. He was in town to participate in the tournament. (Photo by David McNew/Getty Images) , Photographer: David McNew/Getty Images

(Bloomberg) -- Tiger Woods was traveling well over 80 miles per hour, nearly twice the speed limit, before a car crash in Los Angeles that injured the golf star in February.

The Los Angeles County Sheriff’s Department said Wednesday that the rate of speed -- plus a sharp curve in the Palos Verdes Peninsula area where he was driving -- caused the crash. There weren’t indications that Woods had been drinking or was impaired by medication, the department said.

The speed limit in the area was 45 miles per hour, and Woods failed to negotiate the curve, sending his Genesis GV80 SUV into a rollover crash. The golfer was driving at a rate that was unsafe for the road conditions, but police didn’t find evidence of reckless driving or see him speeding.

The department determined the cause of the crash after recovering the vehicle’s so-called black box, a data recorder. The speeding would be considered an infraction, and a decision was made not to cite the golfer.

“We’re not going to issue a citation on an infraction,” Sheriff Alex Villanueva said.

Woods, 45, suffered severe injuries to his legs in the crash and his car hit a sign and a tree before coming to a stop in the brush. No blood was drawn to determine if he was impaired.

Woods’s injuries threatens to end a legendary golf career that included winning some 106 tournaments, including 15 of the majors.

(Updates with more on crash in second-to-last paragraph.)