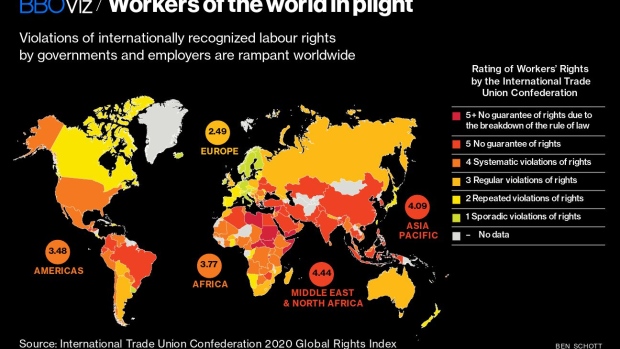 A demonstrator holds a sign during a strike outside of a Allan Brothers Fruit apple packing house in Naches, Washington, U.S., on Monday, May 18, 2020. Workers have gone on strike at least six other fruit packing companies in the county, demanding safer working conditions and more pay, Kima TV reported. Photographer: David Ryder/Bloomberg , Bloomberg

(Bloomberg Opinion) -- Workers of the world are increasingly at risk as governments and employers continue to violate globally recognized labor rights.

According to the latest International Trade Union Confederation’s Global Rights Index which ranks 144 countries on their respect for workers’ rights, “the breakdown of the social contract” is at its worst point since the index’s creation in 2014.

This report was compiled before the full scale of Covid-19 was known. That’s all the more reason to hope that its sobering ﬁndings will shape the rights of workers and trades union in any post-pandemic reconstruction, providing what Sharan Burrow, the ITUC’s general secretary, called “a benchmark against which we will hold governments and employers to account.”