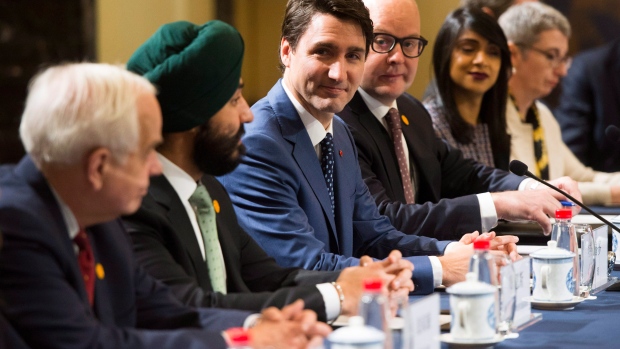 GUANGZHOU, China -- The world is at a "pivot point" and will fail unless countries embrace free trade and elevate their citizens who have been left behind by globalization, Prime Minister Justin Trudeau warned Wednesday.

Trudeau delivered that dire, anti-protectionist message to a high-powered business audience at a major international conference in this bustling southern Chinese city of Guangzhou.

Trudeau came to the Fortune Global Forum, a Davos-style gathering of the world's business elite, to sell Canada as good place for foreign investment, but he went off script and delivered a stern warning about the dangers of allowing protectionism and inequality to flourish.

"We are at a pivot point in the world right now, where we decide whether we work together in an open and confident way and succeed or whether we all falter separately and isolated," he said.

"As that anxiety spreads, people start to turn inwards. They start to close off. They start to get fearful," he added. "If that continues to happen, make no mistake about it, we will all lose."

Trudeau didn't mention the Donald Trump administration in Washington, but he's already spoken out in China on the need to save the North American Free Trade Agreement from demise. He was delivering the message to a gathering of business leaders meeting under the banner of "Openness and Innovation: Shaping the Global Economy," that brought together the chief executives from the world's biggest companies.

In his speech, he singled out China as  kindred economic spirit, saying it is "well aligned" with Canada to fight for liberalized trade.

"In this new era, we refuse to get left behind; instead we have chosen to lead. We know there are significant disruptions around the world, in our workplaces, within our borders in our countries."

Canada and China are still working towards starting formal free talks, a task that has been given to International Trade Minister Francois-Philippe Champagne, who stayed behind in Beijing where Trudeau held meetings earlier in the week.

Trudeau's meetings in Beijing with China's top leadership failed to move Canada-China free talks forward from a long round of exploratory talks to the start of formal negotiations. But both countries say economic bonds are stronger than ever as Trudeau was warmly welcomed by President Xi Jinping and Premier Li Keqiang in Beijing.

Trudeau had separate meetings and dinners with Xi and Li before jetting south, where he spent the first of two days glad-handing with business leaders from Fortune 500 companies.

Trudeau renewed his friendship with billionaire Jack Ma, the founder of the Asian e-commerce powerhouse Alibaba, who praised the prime minister for a new policy that will speed the Canadian visa process for skilled workers.

"It's going to be huge news among the Chinese young people," Ma told him.

They have gathered at a 36-story luxury hotel that shoots through a dense haze overlooking the Pearl River, the grand waterway that winds through the busiest industrial concentration of companies on the planet -- 70 million people in nine southern Chinese cities.

Canada is no slouch either, the prime minister said.

"We're becoming the go-to economy for ambitious companies looking to take their business to the next level," Trudeau said in his keynote address.

He said Canada is becoming a world leader in artificial intelligence, robotics, and quantum computing. He said Canada is a stable and predictable destination for investment with a good banking system.

The prime minister made it clear he wants Canada to move forward with the trade talks with China but said there needs to be an agreed framework that includes progressive elements such as gender, labour rights and the environment.

"China and Canada share the belief that more openness and more collaboration is the right way forward. Closing our doors will only hurt our businesses, and our citizens," Trudeau said.

Trudeau began Wednesday with a meeting of Chinese Vice Premier Wang Yang, who decried the forces of protectionism as like living in a "dark room."

Trudeau displayed a fond nostalgia for this city, which he visited 22 years ago he was a student backpacker. He told Wang the connections between this city and Canada run deep because many of the earliest Chinese immigrants came from this region.

He returned to Shamian Island, a beautiful tree-lined garden oasis in the city, where families with young children, millennials, and many others strolled on the square cobblestone boulevard lined with green and pink foliage under a canopy of Banyan trees.

Trudeau said he vividly remembered walking the streets of the picturesque neighbourhood, in what was once the city's embassy district, during a visit with the Li Xi, the secretary of the Communist Party of Guangdong province, at an ornate yellow Spanish Colonial guesthouse with stained glass windows.

Trudeau capped a whirlwind day by marking a much darker memory in the history of another city much closer to him: he took part in a candle lighting ceremony at the Canadian consulate to mark the 28th anniversary of the 1989 massacre at Montreal's Ecole Polytechnique, where a gunman killed 14 women.