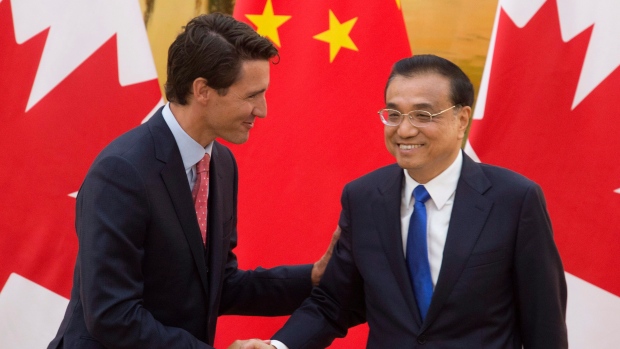 Premier of the People's Republic of China Li Keqiang shakes hands with Canadian Prime Minister Justin Trudeau following a joint news conference at the Great Hall of the People in Beijing, China, on Wednesday, August 31, 2016. , THE CANADIAN PRESS/Adrian Wyld

Canada and China will likely initiate formal free trade negotiations when Prime Minister Justin Trudeau travels to China this weekend, but an agreement still faces major sticking points, according to a former counsellor at the Canadian Embassy to China.

“Mr. Trudeau on the one hand wants to satisfy big business interests with committing to free trade negotiations, while on the other reassuring ordinary Canadians that Canada will continue to effectively engage China on human rights and environment,” Charles Burton, who is also an associate professor of political science at Brock University, told BNN via email. “But China will never agree to link trade with gender and labour rights​.​”

The Dec. 3 to Dec. 7 trip comes after three rounds of exploratory free trade talks, which began in September 2016. Canada is under pressure to diversify its trade as talks to renegotiate the North American Free Trade Agreement drag on with little apparent progress and U.S. President Donald Trump continues to threaten to rip up the deal.

Burton said if formal talks aren’t initiated with China on this visit, they likely won’t be initiated anytime soon.

“Uncertainty over the U.S. imposing tariff and non-tariff barriers on Canadian goods and services increases the pressure on Canada to proceed with free trade with China,” he said.

“But China may impose conditions on Canada in return such as non-reciprocal right of purchase of Canadian energy and mining companies, ​Canada ​agreeing to an extradition treaty and Canada ceasing to publicly engage China on policy differences over human rights and Chinese military expansion in the South China Sea​,” he added. “These would not likely be accepted by Canadians."

Free trade talks between China and Canada would likely develop slowly, Doug Porter, chief economist at BMO Financial Group, told BNN earlier. However, it’s “very important to keep the conversation open” and that Canada should be exploring options with economies other than the U.S., he said.

But Canadians have mixed feelings about a closer trade links with China, according to public consultations conducted by the Canadian government on the matter.

Stakeholders and individuals cited concerns over China’s state-run economy, the interplay between trade and China’s human rights, China’s record for environmental and labour rights, and the country’s inconsistent rule of law, especially in relation to the enforcement of intellectual property rights, according to the summary published last month.

China would reject any demands from Canada for a “meaningful” dispute resolution mechanism “to resolve imposition of arbitrary tax  and other non-tariff measures including demands for intellectual property transfer that over and over tip the balance against Canadian companies ​achiev​ing fair access to the Chinese market,” Burton said.

China was Canada's second-largest trade partner after the U.S. last year, with almost US$70 billion in total trade.

Canadian merchandise exports to China amounted to almost $21 billion in 2016, a four per cent increase from the previous year. The top exports were forest and agricultural products, copper and iron ores, as well as motor vehicles.

Trudeau’s office said the prime minister will meet with President Xi Jinping and Premier Li Keqiang in Beijing, then visit Guangzhou to meet with Li Xi, the province’s party chief secretary and promote a “progressive trade agenda” during his visit.