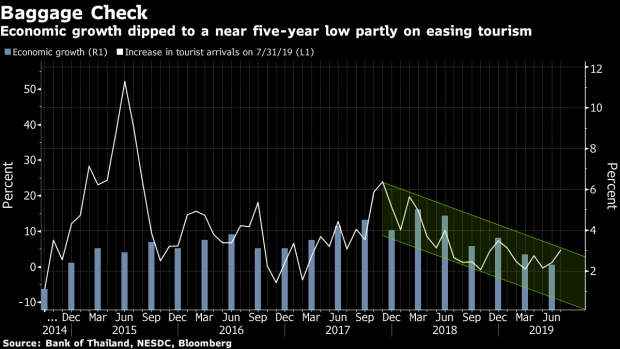 The portrait of Thai King Maha Vajiralongkorn is displayed on a 1,000 banknote baht in an arranged photograph in Bangkok, Thailand, on Wednesday, Sept. 12, 2018. The baht has been a stand-out currency amid the recent rout in emerging markets. It's appreciated 1.5 percent against the dollar so far this quarter, the best performer among major Asian currencies and the only gainer among them. Photographer: Brent Lewin/Bloomberg , Bloomberg

(Bloomberg) -- Thailand’s effort to revive economic growth with more than $10 billion of stimulus faces an obstacle from its surging currency.

The baht has strengthened more than 6% against the dollar in 2019, the most among major Asian currencies, and its appreciation leads the world over the past five years, according to data compiled by Bloomberg.

The climb has hurt tourism and exports, contributing to the weakest economic expansion since 2014 as the U.S.-China trade spat also hits home. The baht is seen as a safe haven and officials will be wary of intervening too much in foreign-exchange markets as the U.S. closely monitors countries’ currency policies, according to Australia & New Zealand Banking Group Ltd.

“Tourism is one of the keys for reviving Thai economic growth, because the industry can turn around quickly,” said Komsorn Prakobphol, a senior investment strategist at Tisco Financial Group Pcl in Bangkok. “But it faces tough challenges as long as the baht strengthens faster than regional peers.”

Bank of Thailand Governor Veerathai Santiprabhob said Tuesday the baht’s appreciation is a big concern for Thai exporters. He’s signaled the central bank may cut its 3.3% economic growth estimate for 2019.

An annual current-account surplus estimated at around $29 billion and near-record foreign exchange reserves of $220 billion underpin the baht. An interest-rate cut and steps to curb some inflows have failed to put a major dent in the currency.

Economic growth slowed to 2.3% last quarter, partly on sluggish tourism. Officials hope for a revival after they waived visa fees for some nationalities, and as travelers seek alternatives to Hong Kong amid unrest there.

Exporters of electronics components are among firms most exposed to baht swings. The SET Electronic Components Index slid 23% this year as the currency surged.

The baht has been resilient despite an increase in foreign-direct investment by Thai firms. As a share of the economy, outbound FDI exceeds its inbound counterpart.

--With assistance from Karthikeyan Sundaram.

To contact the reporter on this story: Anuchit Nguyen in Bangkok at anguyen@bloomberg.net

To contact the editors responsible for this story: Sunil Jagtiani at sjagtiani@bloomberg.net, Michael S. Arnold