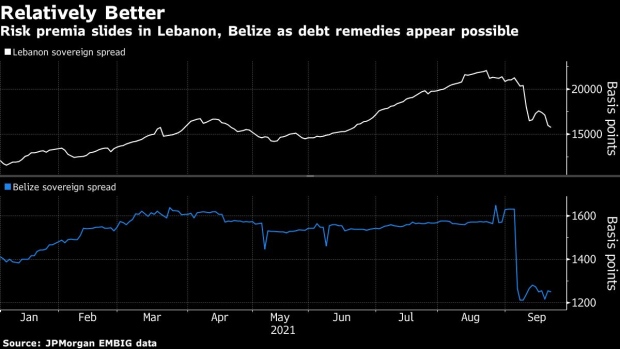 (Bloomberg) -- Two notoriously challenging debt situations are churning out some of the best dollar-bond returns in the world this month.

Crisis-stricken Lebanon’s dollar bonds have returned 31% in September, while the “superbond” from serial-defaulter Belize is up 25%, according to data compiled by Bloomberg. That puts the countries well ahead of peers in a Bloomberg gauge of emerging-market sovereign dollar bonds.

The reasons are clear. In Lebanon, debt holders finally have a government to help negotiate a restructuring. And Belize is on its way to buying back and wiping out its foreign notes completely.

Investors are witnessing the “outperformance of the D rated countries,” said Guido Chamorro, co-head of emerging-market hard-currency debt at Pictet Asset Management. “The market breathes a sigh of relief as the Belize restructuring looks almost done, and in Lebanon, as there is now some hope for a future restructuring.”

Of course, there’s a long ways to go until Lebanon’s debt crisis can be fully remedied. While a group of international bondholders said it was ready to work with authorities on a solution, the nation’s new government was only unveiled a little more than a week ago.

Things are happening faster in Belize, where Friday is the deadline for investors to accept a repurchase proposition. A key creditor group that owns about half of the outstanding notes already agreed to tender its full holdings.