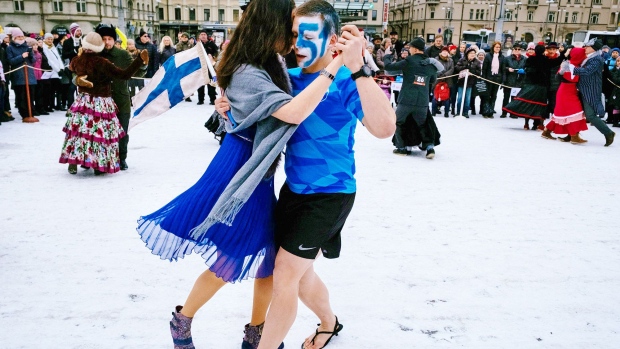 Contestants Simo Lahtinen and Maria Christensen dance during the knock-out round at Lumitango (snow tango) 2020 Championship in Tampere, Finland on February 8,2020. , Bloomberg News

The most cheerful people on Earth are about to get some help managing their finances.

In Finland, which topped the most recent United Nations World Happiness Report, the central bank is drawing up a financial-literacy strategy for citizens.

The idea, conceived in a country that already outperforms much of the rich world in education, is to figure out whether a bit more financial acumen will help Finns borrow less.

Finnish household debt has doubled in the past two decades against a backdrop of falling interest rates and the gradual obsolescence of cash as a form of payment. The people of Finland, home to companies like Nokia and Rovio of Angry Birds fame, are known for being more tech savvy than most. But their willingness to embrace digital payments over cash has coincided with less discipline in their spending habits.

Now, a record seven per cent of Finland’s 5.5 million citizens can’t pay their bills, up by a third over the past decade. In recent years, the authorities have raised the alarm on growth in consumer credit in particular. 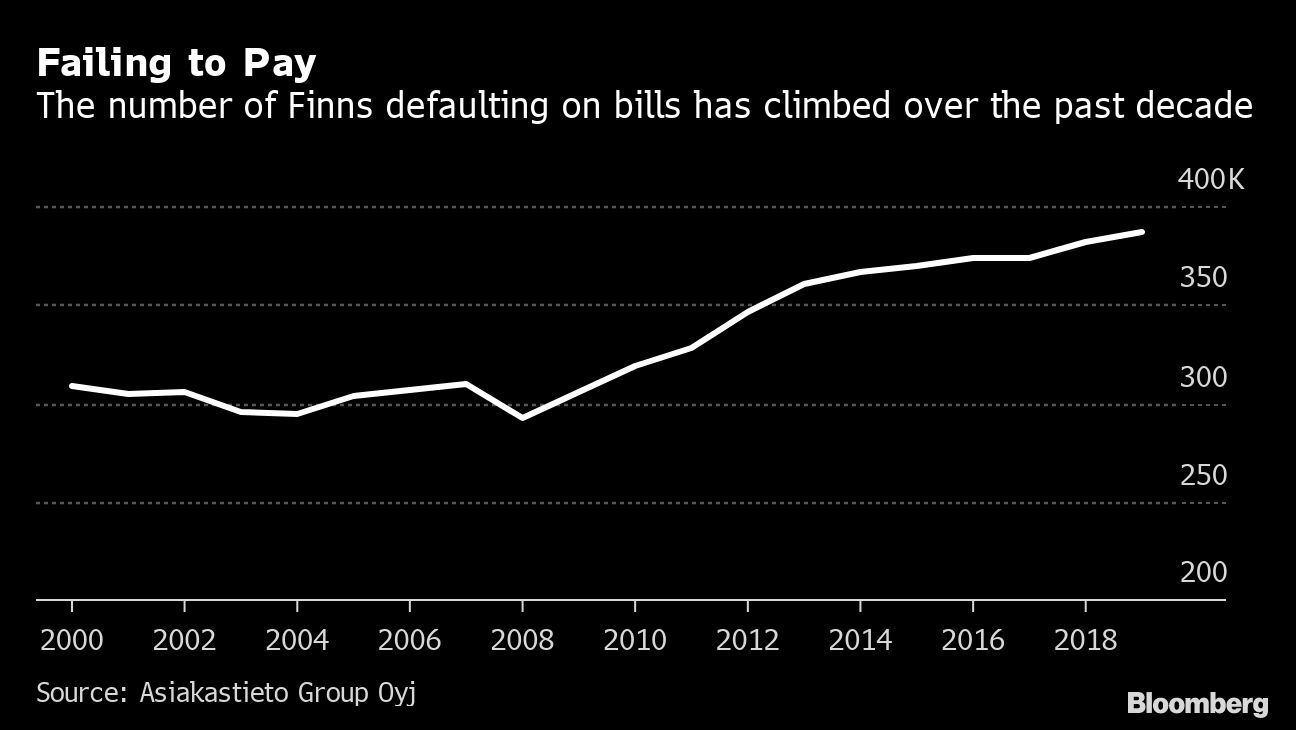 Juha Pantzar, executive director of the Guarantee Foundation, which helps over-indebted people regain control of their finances, says the fact that “cash has vanished” has created a new reality that’s “obscuring people’s feel for money.”

“A lot of people have a hard time estimating where their money is spent, how much they will have left at the end of the month, and how much they can afford to borrow,” he said.

About twenty years ago, cash was used in 70 per cent of payment transactions at stores, with cards accounting for the rest. Now, those metrics have flipped: card, mobile and other digital modes of payment were used in more than 80 per cent of the time in 2018, according to data compiled by the central bank.

Olli Rehn, the governor of the Bank of Finland, says, “Consumers have largely already moved to a digital world” when it comes to payments. “People no longer have such physical budget limitations as they used to do, and that makes it harder for people to manage their finances.”

That’s where the central bank hopes to make a difference. Its first step will be to compile data and best practices from organizations already working in the field in a bid to scale up their work and ensure all groups in society are getting adequate assistance. Then, it will set national targets for financial literacy, and work with third-party providers to coordinate the roll-out of the national plan. (The central bank is still working on the details of the program.)

“A lot of work is already being done among young people, but there’s a lot of older people who need help in navigating increasingly digital financial services,” Anu Raijas, a senior adviser at the Bank of Finland who’s formulating the strategy for financial literacy, said by phone. “The aim is to have the data compiled and a strategy ready by the end of the year.” 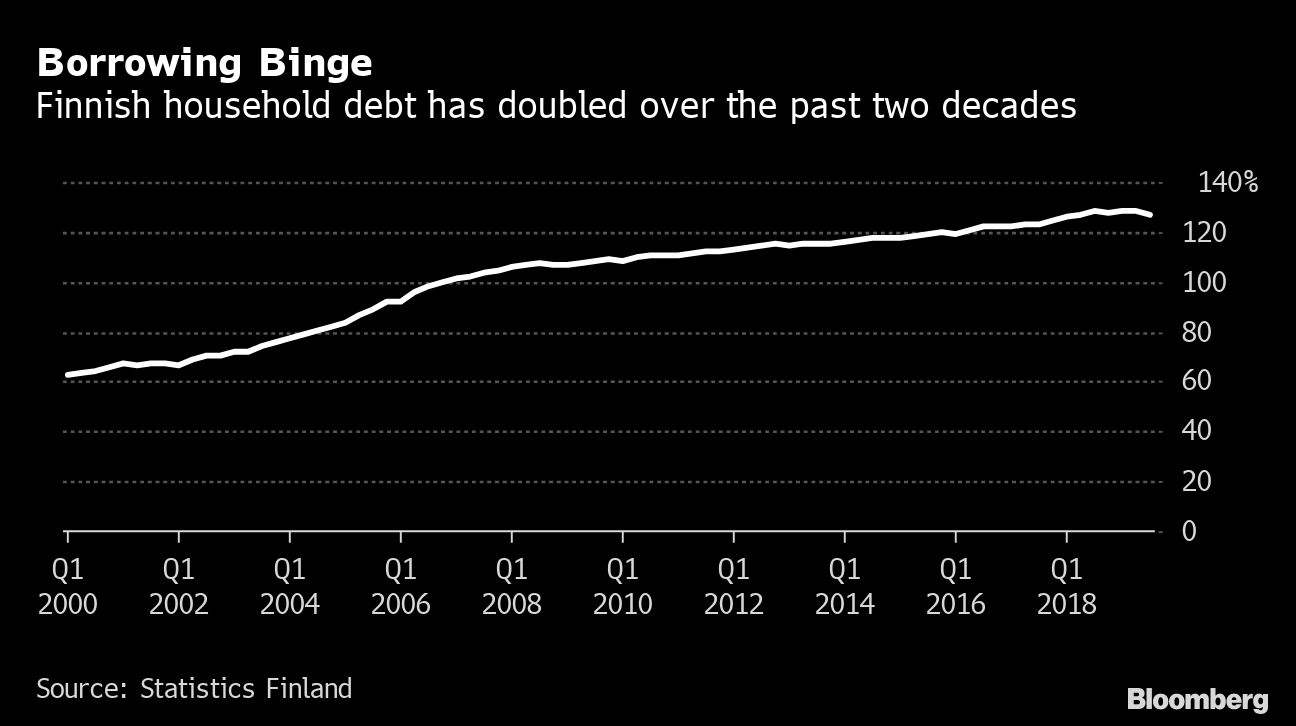 Finland has already explored other ways to cut household debt. The financial regulator has capped home loans at 85% of a property’s purchase price, and plans for further restrictions are in the works at the Finance Ministry.

By 2023, the government wants to have a credit registry with records of everyone’s borrowing to help lenders assess whether to grant a new loan. Rules on consumer credit were tightened last autumn.

Finnish authorities are worried about the human cost of debt which, in extreme cases, can even result in people being sidelined from the labor market as employers shun workers with poor credit histories, and because people servicing massive debt loads find little benefit in working.

Finland’s debt concerns aren’t limited to its private households. While Denmark, Sweden and Norway all enjoy AAA ratings across the board, Finland stands out for its AA+ grade after government debt repeatedly tested the European Union’s 60 per cent threshold of GDP.

In Finland’s parliament, there’s a broad consensus that keeping consumers as informed as possible on the dangers of debt is key. The plan also has the backing of the financial sector.

“No one should have to learn to manage their finances by trial and error,” said Piia-Noora Kauppi, managing director of Finance Finland, which represents the industry. “These skills should be taught at school much more and much earlier.”

True to style, the Finns are exploring high-tech paths toward educating citizens on how to use their money. In the future, new tools built on machine-learning algorithms will help forecast people’s financial behavior and make personal cash-flow predictions, as well as give advice to consumers on their spending.

The caveat is that “people need to be willing and motivated to use those tools,” Kauppi said. “If you don’t want to face your financial reality, then none of these tools will help.”