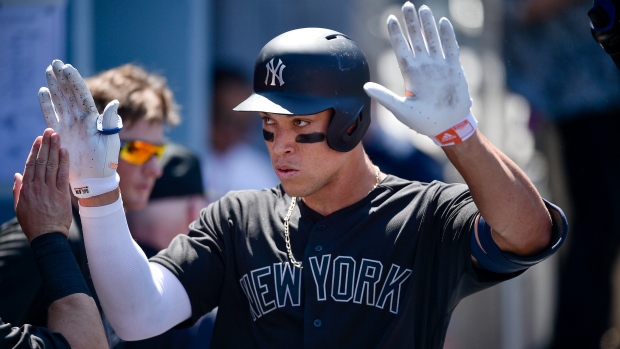 New York Yankees' Aaron Judge celebrates with the dugout after hitting a solo home run during the fourth inning of a baseball game against the Los Angeles Dodgers in Los Angeles, Saturday, Aug. 24, 2019. , The Canadian Press

The New York Yankees are joining forces with Sinclair Broadcast Group Inc. and Amazon.com Inc. to buy the team’s cable network in a deal valued at US$3.47 billion.

Disney acquired majority ownership of the YES Network as part of its US$71 billion takeover of 21st Century Fox film and TV assets earlier this year. But the Yankees’ owners had an option to buy out that stake and held lengthy talks leading up to Thursday’s announcement.

Sinclair, a Baltimore-area broadcaster, has been scooping up regional sports networks and recently purchased 21 channels from Disney as part of the Fox deal. It will own 20 per cent of YES, according to a separate statement.

The team will have the largest piece, with 26 per cent, Yankees President Randy Levine said on a conference call. Amazon will have 15 per cent, with the right to buy more. The financial investors, meanwhile, will roughly split the remaining 39 per cent.

For Amazon, the deal builds on a gradual push into sports. The Seattle-based company has been trying to supplement its video-streaming service with live sporting events for the past few years. Amazon had a deal with the NFL to stream Thursday night football games, and last year it inked a deal to stream Premier League soccer matches in the U.K.

Analysts have speculated that Amazon is interested in sports programming because the company could combine watching an event with buying merchandise from its online store. Amazon declined to comment on its plans for the YES investment.

The Yankees’ Levine called YES “by far the most successful” regional sports network in the country. He described the new investors as “literally a dream team of partners.”

“We believe that we’re going to take it to the next level,” he said.