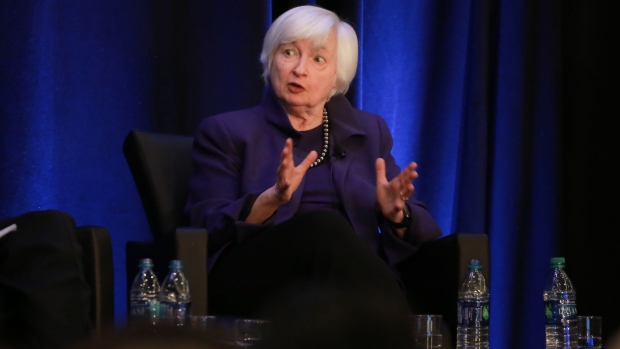 As Treasury secretary, Janet Yellen is almost certain to pursue tighter coordination with the U.S. Federal Reserve next year -- repairing recent frictions -- though observers say she will be careful to avoid any specific move that could trigger a wave of Republican protests.

President-elect Joe Biden’s pick for Treasury was at the Fed for the better part of two decades, and saw first-hand how vital the cooperation of the two agencies is to ensuring the flow of credit amid stressed economic times.

Step one, after winning Senate confirmation, will be deciding how to proceed with several emergency Fed lending facilities backed by Treasury money and authorized by Congress through the Cares Act, after outgoing Treasury Secretary Steven Mnuchin announced he would sunset them by year-end.

Yellen will need to make a call on whether she has the legal authority to resurrect the programs, which the Fed said it wanted to extend. The question was made tougher by Mnuchin’s latest plan to put unused Cares Act money into the department’s general account, over which Congress has authority.

Both of Mnuchin’s moves have prompted strong partisan reactions, showcasing the charged political atmosphere that Yellen will be entering in her new role. With financial conditions easing amid record stock highs on Wall Street, it could afford her the space to put off any change in direction, as she also attempts to persuade Congress to enact a new fiscal stimulus package.

“The immediate need for some of these facilities certainly has subsided,” said Michael Gapen, chief U.S economist at Barclays Plc in New York and a former Fed Board economist. Yellen is “likely to wait and see if there is a vulnerability” that shows up in financial markets, he said.

Mnuchin contends that the relationship between the Treasury and the central bank is “incredibly coordinated” under his stewardship, and that he and Fed Chair Jerome Powell had been speaking “for weeks” about the sunsetting of the facilities required by legislation.

“It wasn’t a new or sudden issue,” Mnuchin said in a phone interview early Wednesday.

Here some issues and questions about the facilities.

Mnuchin last week said five Fed facilities must sunset at the end of next month, and asked for the central bank to return unused funding. On Tuesday, the Treasury said it plans to move that unspent money into its general account -- from where it cannot be released without congressional approval. Congress had authorized those funds to go into the Treasury’s Exchange Stabilization Fund, over which the secretary otherwise has substantial discretion.

Mnuchin said his intention was to make the money readily available to Congress to be used for helping small businesses and unemployed Americans, arguing that grants were better than loans for distressed parts of the economy.

What about the politics?

Democrats have charged Mnuchin with trying to hamstring the incoming administration’s ability to address a flagging economic recovery amid the resurgence of the coronavirus.

The Biden transition team last week called Mnuchin’s clawing back of unspent money from the Fed “deeply irresponsible.” Congressional Democrats said the money ought to have been left in place.

Republicans underscored Mnuchin’s argument that the facilities had done their job. Record corporate bond issuance has shown that businesses have ready access to capital markets.

Senator Pat Toomey, a Pennsylvania Republican and member of a congressionally appointed watchdog panel overseeing Fed and Treasury COVID-19 programs, signaled a warning against any move by Yellen to restart the funding of Fed facilities.

“I look forward to discussing with her a variety of issues, especially the legal requirement for Cares Act temporary emergency lending facilities to shut down by year-end and remain shut down, absent further congressional action,” Toomey said.

The emergency lending facilities were vital in calming jittery markets in March and April. Mnuchin agreed to extend a minority of them, including for commercial paper and money market mutual funds -- both key parts of the financial system’s plumbing -- underscoring the importance of at least some backstops.

But the Main Street Lending Program for smaller businesses has had trouble finding lenders and borrowers alike, and the corporate-bond programs have had little to do of late.

“The take-up in 2020 so far has been underwhelming,” Wharton professor Peter Conti-Brown pointed out in a Tuesday blog post for the Brookings Institution.

That said, economists and some central bankers have warned that there’s still a risk of a renewed economic contraction, with the potential for fresh credit strains alongside. And financial markets might not yet have accounted for the phasing out of the facilities.

“There’s a big potential pothole over year-end,” Bob Michele, JPMorgan Asset Management chief investment officer, said on Bloomberg TV Wednesday. The withdrawal of Fed backstop facilities is “something that the market still has to digest. I don’t know that it’s fully digested it.”

Do the facilities shut down completely?

No. The assets already lent out will remain in place. For example, the Main Street program has US$5.3 billion in assets that will stay in place. But those being sunsetted will not be able to make new loans.

Does the Fed have to return the money not yet allocated?

Yes, as Powell said on Friday that the central bank would send the money back.

What is Yellen expected to advocate for?

Wall Street economists, including some who worked at the Fed when Yellen was there, said she is likely to remain flexible. The corporate bond markets, which are functioning well, may not be a high priority, and fighting Senate Republicans on that could burn up both time and political capital.

Given that use of the municipal and Main Street Lending Facility is relatively low, Yellen may also want to consider if the Fed is the right place for such programs in the first place, he said.

“The underlying question is, did they have the right structure to address the issues they needed to address?” said Carpenter, who is now chief U.S. economist at UBS Group AG in New York.

Can anything be done without Congress?

The Fed used to have broader emergency authority to extend credit, but that was significantly curtailed in the wake of the unprecedented actions it took in the 2007-09 financial crisis. The Dodd-Frank financial reforms of 2010 left the central bank with limits on what it can do. Some of the actions it took back then would need approval by the Treasury secretary.

The Fed can still lend directly to banks through the discount window, and it can swap dollars for foreign currency to any foreign central bank without Treasury approval.

With backing from the Yellen Treasury, the Fed could also resurrect emergency lending facilities or establish new ones using funds from outside the Cares Act. And there’s just under US$80 billion in the Treasury’s Exchange Stabilization Fund.

What does the Fed want?

Powell’s stated preference was to keep all facilities open. A central banker typically wouldn’t call the end of an emergency with a new wave of contagion spreading through the country even if markets were functioning well.

He called the recovery “incomplete” in a Nov. 17 conference, and said the time to close them was not “yet or very soon.” He noted in last week’s response to Mnuchin that Exchange Stabilization Funds were available to the Treasury secretary should a Fed facility need a backstop. A Fed spokesperson declined further comment Tuesday.