Treasury Secretary Janet Yellen defended the need for US$1.9 trillion in pandemic-relief spending -- the second-largest emergency aid bill on record -- even with recent strength in retail sales and U.S. stock values.

“It’s very important to have a big package that addresses the pain this has caused,” Yellen said on CNBC Thursday. “The price of doing too little is much larger than the price of doing something big.”

The Treasury chief, asked if the economy needs President Joe Biden’s full package after much stronger-than-expected retail sales in January and record highs in equities, said, “I think it does.”

Yellen pointed to more than 9 million Americans still unemployed compared with before the COVID-19 crisis hit, with 4 million having left the workforce entirely. She also cited the danger of a “permanent, life-long toll” for people put out of work over the long haul.

A fresh surge in U.S. jobless claims showcased the continuing damage the pandemic is wreaking on the job market. Initial filings for unemployment benefits in regular state programs totaled 861,000 in the latest week, well above forecast and also higher than the peak level seen in the 2007-09 recession. 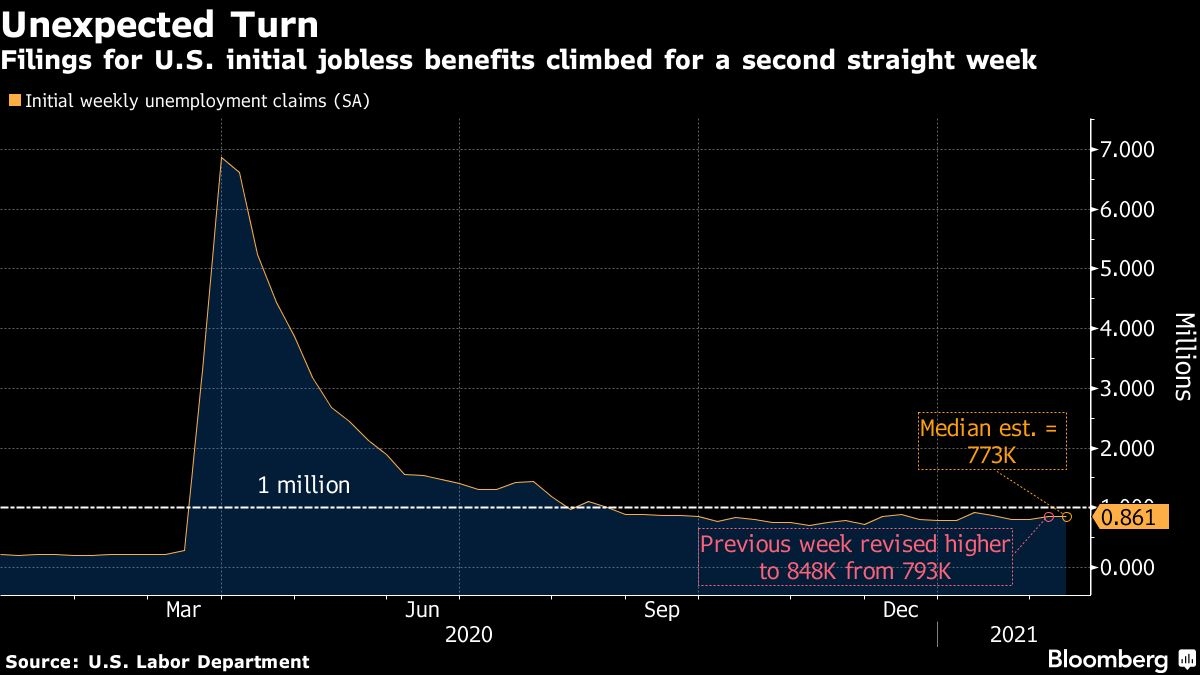 Yellen said she expects progress on Biden’s aid bill in the coming two weeks. The House is targeting a Feb. 26 vote on the bill, which will then shift focus to the Senate. Lawmakers are planning to finish by March 14, when enhanced unemployment aid from the December relief package runs out.

If all goes well, including with the roll-out of vaccines, Yellen saw the potential for the U.S. to recoup employment losses in 2022. Biden earlier this week said that estimates showed passage of his aid bill could ensure 7 million jobs are created this year.

“We could be back to full employment next year,” Yellen said. Even so, she said of the pandemic’s course that “that’s an area of considerable uncertainty.”

The Biden administration is still discussing elements of the longer-term recovery package that’s designed as a follow-on to the relief bill, Yellen said. Tax increases will “pay for at least part of it -- that would probably phase in slowly over time,” she said.

The idea is to pay for “the parts that are permanent,” in order to avoid driving up long-term deficits, Yellen added.

Optimism about faster growth thanks to the coming fiscal packages has helped drive equities to record highs this month, and also propelled Treasury yields. Yellen expressed little concern, however.

“While valuations are very high, in a world of very low interest rates” measures such as price-to-earnings multiples do “tend to be high,” Yellen said. “That said, there may be sectors where we should be very careful,” without specifying any.

Asked about Bitcoin, which has also climbed to record highs this month, Yellen said, “It’s important to make sure that it is not used as a vehicle for illicit transactions and that there’s investor protection.”

The Treasury Department began cracking down on the use of digital assets for illicit transactions, especially as a way around sanctions, over the past two years. The agency on Thursday announced it had reached a half-million dollar settlement with BitPay Inc. for more than 2,000 violations of sanctions in North Korea, Iran and other countries.

Yellen indicated the emphasis will be on the companies that deal in cryptocurrencies.

“Regulating institutions that deal in Bitcoin, making sure that they adhere to their regulatory responsibilities is certainly important,” Yellen said.