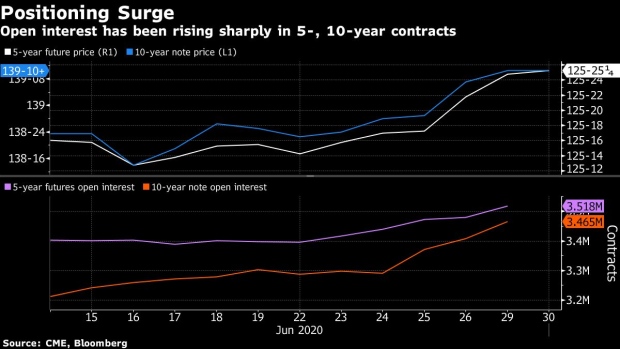 (Bloomberg) -- Bets that the Federal Reserve will implement yield-curve control sooner rather than later are showing up in positioning data and the curve itself.

The evidence is all over the belly of the Treasury curve, with yields on five-year bonds hovering on Tuesday near this week’s record low. Open interest in five and 10-year futures, a tally of outstanding positions, has also surged, registering an equivalent to $36 billion in cash bonds in the past week.

Traders are positioning ahead of Wednesday’s Fed minutes, which may indicate how close the central bank is to delivering curve control. More than half of the economists surveyed by Bloomberg earlier this month expect YCC, with most saying an announcement could come in September.

The strategy, which involves using bond purchases to pin down yields on certain maturities to a specific target, was once deemed an extreme and unusual measure. That perception changed after Australia adopted its own version in recent months, following a similar move by the Bank of Japan four years ago after it became clear that a two-decade deflationary spiral wasn’t going away.

Investors say a global adoption could spark a “buy everything” rally. That said, the wider economic outlook probably doesn’t justify a similar announcement by the Fed for now, according to Rabobank International strategist Richard McGuire in London. Despite a jump in Covid-19 cases in the U.S. equities remain relatively buoyant.

“There’s a dead-cat-bounce effect in the data,” he said. “The data tone looks positive and that supports the glass-half-full notion of V-shaped recovery expectations, even though our view is that those expecting this will see the ‘V’ was the first part of a ‘W.”

Open interest in five-year U.S. bond futures has jumped by more than 120,000 contracts in the past five trading sessions -- the equivalent to around $13 billion in cash bonds.

It has been mirrored in 10-year note futures, which has a seven-year bond as the underlying instrument. That experienced a jump of almost 180,000 contracts, or $23 billion in cash bonds.

In the Bloomberg economist survey, the expectation is that the Fed will target two- or five-year maturities if the central bank implements yield-curve control. Two weeks ago, Fed Chair Jerome Powell told lawmakers that officials were in the early stage of evaluating the option, and haven’t yet come to a decision.

Five-year yields extended their drop to a record 0.2657% on Tuesday.

Overnight swap markets show that rate expectations remain above levels priced in May. That suggests the recent activity is about preparation for yield-curve control rather than wagers on the Fed taking its policy rate negative.

(Adds context, analysis from Rabobank from the fourth paragraph.)