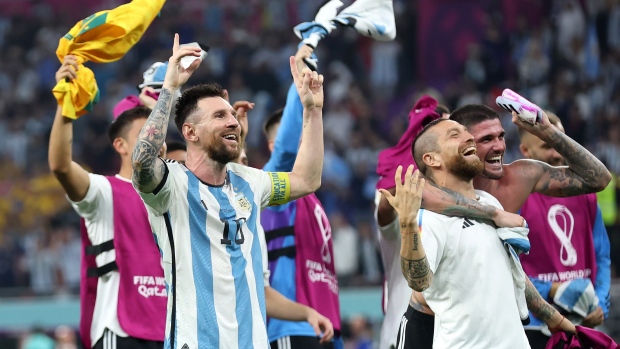 The big event: The OPEC+ alliance decided to maintain production at current levels despite data showing that Russia has been undermining the previous agreement to cut output. Oil analysts say the group faces too much uncertainty — including China’s demand outlook and the new EU price cap on Russian crude exports — to change course now.

The big trades: As Manchester United seeks a new owner, it’s one of a handful of well-known publicly traded clubs whose share price moves would test the faith of even the most loyal supporters. And after the euro’s best month in 12 years, traders expecting a year-end rally may be disappointed.

The other big event: England plays Senegal in a World Cup knock-out match tonight. The winner of the Africa Cup of Nations will pose a formidable challenge even without star forward Sadio Mane, who left Liverpool this year to join Bayern Munich. Argentina and the Netherlands were the first teams to make it to the quarterfinals.

The big shift: As China’s easing of Covid measures starts to take shape, investor focus is seen shifting from frenzied stock bets on airlines and catering to longer-term plays such as consumer and health-care shares, with some betting on a full reopening by March.

The big slump: Still, China’s numbers due in the week ahead are expected to be ugly, highlighting the damage done to the economy from Covid restrictions and weak external demand. Trade data will probably show imports and exports falling, consumer price inflation withering, and factory-gate prices slipping deeper into deflation.

The big fightback: South African President Cyril Ramaphosa was considering resigning last week after a panel said he may have violated the nation’s constitution in a scandal involving the theft of at least $580,000 stashed in a sofa at his game farm. By Saturday, he said he’d seek a second term as leader of the governing ANC and might ask the courts to review the report.

The big opinion: Barely weeks in power, Rishi Sunak is fending off a series of crippling rebellions from within his own party. Now he must face a wave of industrial challenges from without. Unions representing railway workers, teachers, postal workers and, most politically dangerous of all, doctors, nurses and ambulance workers are threatening to withdraw their labor before Christmas, Martin Ivens writes.

The big divide: Voters in the US state of Georgia head back to the polls in a vote that will decide whether Democrats gain a 51-49 edge in the Senate or the chamber remains evenly split, needing Vice President Kamala Harris as a tiebreaker.

ICYM our Big Take: A surge in gambling addiction and related suicides in UK highlights the nation’s problems in protecting consumers. While a tougher gambling law is pending, MPs enjoy financial links with gaming companies.

And finally, with so many now rekt in the Crypto winter, and others just hodling on, telling fellow investors WAGMI, here’s a Quicktake guide to avoiding McDonald’s in the crypto winter.