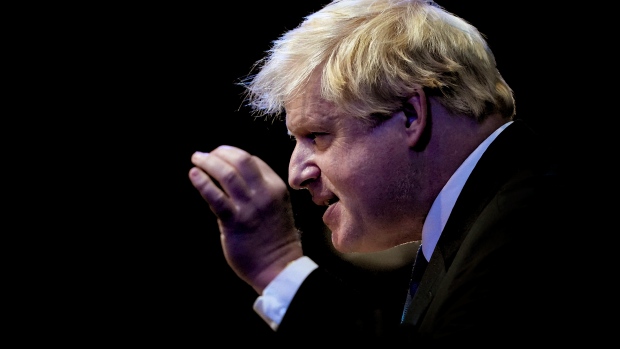 There’s a big week ahead for central bank watchers. The Federal Reserve, Bank of England and Bank of Japan are all set to meet, and the European Central Bank gathers for a forum in Sintra, Portugal. Investors are eager to figure out when and where the next interest rate cuts will be. Data from Morgan Stanley showed U.S. business conditions deteriorating this month by the most on record, reaching their lowest point since 2008, adding to recent signs that the U.S. economy is slowing.

U.S. President Donald Trump alleged that Iran was responsible for attacks on oil tankers near the Persian Gulf and vowed the Strait of Hormuz won’t be closed. Iran vehemently denied any role in the incident.

“Salvatore Mundi,” the Leonardo da Vinci painting of questioned provenance that sold for $450 million, has been located. It’s on the yacht of Saudi Crown Prince Mohammed bin Salman, according to Artnet.

What you’ll want to read in Bloomberg Politics

The Tories really want to trust Boris Johnson. But can they? That’s the question Britain’s Conservatives face as they consider whether they really want Boris Johnson to become their next prime minister. Johnson has what looks like an insurmountable lead in the race to follow May, even though there’s plenty of evidence Tories shouldn’t have faith in what he says.

To contact the author of this story: Ian Fisher in New York at ifisher10@bloomberg.net