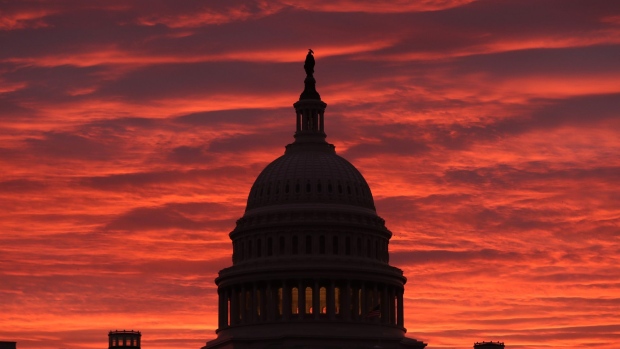 WASHINGTON, DC - NOVEMBER 07: The sky turns to a fiery color as the sun begins to rise behind the U.S. Capitol building, on November 7, 2019 in Washington, DC. Chairman of the House Intelligence Committee, Adam Schiff (D-CA) announced that public hearings will begin next week in the impeachment inquiry against U.S. President Donald Trump. (Photo by Mark Wilson/Getty Images) , Photographer: Mark Wilson/Getty Images North America

Investors will spend the weekend looking for signs of progress toward an interim trade deal between the U.S. and China. While on Thursday both sides said they were ready to drop some tariffs, on Friday President Donald Trump poured cold water on such a rollback. In Europe, the outlook worsened while Britain’s central bank seemed split over its Brexit response. Warnings of excessive froth punctuated the week, including one by billionaire Ray Dalio concerning the perils of free money.

Boeing engineers were almost done redesigning software on the grounded 737 Max when pilots came close to crashing in a simulator test. That’s when the delays began.

Investment banks worried about the costs of climate change are putting U.S. state and local governments on the spot when they sell bonds, Bloomberg Businessweek reports. In Central Asia, ecological degradation is threatening water access for hundreds of millions of people.

Netflix, HBO and cable giants are cracking down on a loophole that’s nice for customers but could be draining billions of dollars in revenue.

What’s wrong with a four-day workweek? Maybe nothing, Noah Smith writes in Bloomberg Opinion, since long hours can hurt productivity.

What you’ll want to see in Bloomberg Graphics

Stanford led Bloomberg Businessweek’s ranking of the top U.S. business schools for the second straight year, taking in high marks for compensation and entrepreneurship. Dartmouth jumped to second place. Harvard, University of Chicago and University of Virginia rounded out the top tier.

To contact the author of this story: Tony Czuczka in New York at aczuczka@bloomberg.net