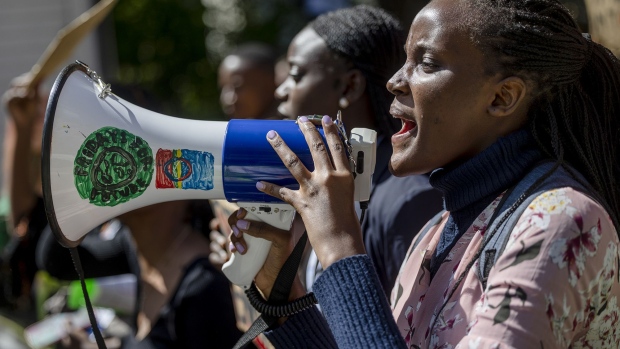 (Bloomberg) -- Just because the next big climate conference is happening in Egypt doesn’t mean international leaders will pay more attention to the adverse effects already being suffered by developing nations, one of the world’s most prominent young environmental activists said.

“It’s important to highlight the need of having African voices” at November’s United Nations summit, known as COP27, yet many African climate activists are still struggling to secure accreditation and funding to attend, said Vanessa Nakate, a 25-year-old Ugandan.

Meanwhile, she said, wealthier countries — including the US — aren’t doing enough to help poorer nations that barely contributed to greenhouse gas emissions that are warming the planet yet are being lashed by unprecedented storms, floods, landslides and droughts as a result.

Nakate, who was appointed a UNICEF goodwill ambassador last month, will discuss her concerns in a speech at the National Press Club in Washington on Friday.  She has worked closely with teenage Swedish activist Greta Thunberg and the two co-authored an open letter in Time magazine last year urging the news media to focus more of their coverage on climate justice.

One of Nakate’s main concerns is loss and damage, the idea that rich countries should pay poorer nations to adapt to the adverse effects of global warming and to compensate them for the economic losses they’re enduring as a result. A group of 134 mostly developing countries called at last year’s COP26 meeting in Glasgow for new financial support to help them address climate change effects that they’ve already experienced. The issue is expected to take center stage at the next gathering, hosted by an African country that’s warming faster than much of the planet and suffering from desertification, rising sea levels and suffocating heat.

But the US has historically hesitated to make meaningful commitments to loss and damage financing, even fighting to keep the concept of legal liability out of the 2015 Paris climate accord.

“The United States has stood in the way over the loss and damage facility, and countries that are suffering right now are still demanding that facility,” Nakate said. “I need to see the United States helping those that are suffering right now.”President Joe Biden has pledged to quadruple international climate financing. In the 2023 federal budget, he asked Congress to dedicate $11 billion toward helping other nations deploy clean energy and adapt. The figure includes a $1.6 billion contribution to the Green Climate Fund, an international coalition that helps developing nations address climate change. The US halted its contributions during the Trump administration.Nevertheless, White House climate envoy John Kerry said last year that, while it’s important for the US to be “thoughtful and sensitive to the reality” faced by developing nations, he also also didn’t want to create “some unfulfillable obligation that people just aren’t able to manage.”

Nakate said young people have already done their part around the world to sound the alarm on the climate crisis, resisting the notion that her generation has a special obligation to bring about change.

“Many times, as young people, we find ourselves in situations where we are asked, ‘What more can we do?’” she said. “It puts such responsibility on young people. We’ve done everything that we can do. Now it’s time for the leaders to do what they need to do.”

—Stephen Lee is a reporter for Bloomberg Law.