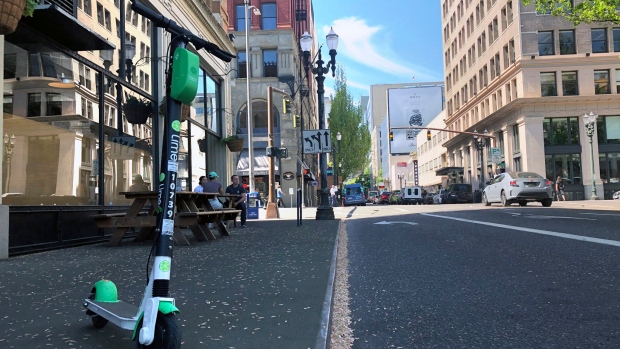 A Lime e-scooter sits parked on a street in downtown Portland, Ore., Thursday, May 9, 2019. , The Canadian Press

A YouTube star’s death on an electric scooter may renew safety concerns as scooter companies aggressively seek to expand their presence as “alternative transportation.”

Emily Hartridge, a television presenter who made videos about fitness and mental health, died after her scooter was hit by a truck in London, apparently making her the first such fatality in Britain, The Guardian reported. The death comes amid scores of complaints about safety as scooter use rises by the millions in North America, Asia Pacific and Europe.

Some officials in the U.S. have been reluctant to allow e-scooters, citing safety to both the rider and the public, as well as clutter from riders leaving scooters on sidewalks.

Nashville Mayor David Briley said in June that he would recommend banning them after a 26-year-old resident died after a scooter accident. The Nashville Fire Department had responded to 74 scooter-related injuries between January and April 2019, according to figures from the city.

“If these devices return in the future, it will be after a public process, on our terms, with strict oversight for numbers, safety, and accessibility,” Briley tweeted.

Scooter-rental companies Lime and Bird Rides Inc. have been rapidly expanding and lobbying local officials in places like New York City to legalize the vehicles. But the safety concerns could prompt more bans or regulation that could be a hurdle to increasing ridership. Last week, Chattanooga, Tennessee, enacted a six-month ban on dockless electric scooters and bikes.

”Cities are saying, ‘Hold on a second -- we can’t go through with you what we went through with Uber and Lyft five years ago,’” said David King, an urban planning professor at Arizona State University.

Consumer Reports reported in February that there have been about 1,500 incidents of people seeking treatment for e-scooter-related injuries in the U.S. since late 2017.

The Centers for Disease Control and Prevention has said the public health impact from the scooters is “generally unknown.” The CDC completed a study of medical records of people who used emergency services from September to November in Austin, Texas, found that almost half the injuries were “severe.”

Boston Consulting Group said in a report this year that public safety remains a key issue for cities. It estimates the global market for shared e-scooter rides could reach up to $50 billion by 2025, but noted that “mass adoption” isn’t certain.

To contact the editors responsible for this story: Elizabeth Campbell at ecampbell14@bloomberg.net, James Ludden