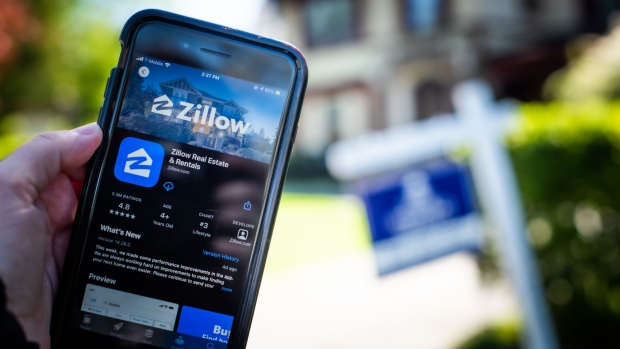 The Zillow app on a mobile phone arranged in Dobbs Ferry, New York, U.S., on Saturday, May 1, 2021. Zillow Group Inc. is scheduled to release earnings figures on May 4. Photographer: Tiffany Hagler-Geard/Bloomberg , Bloomberg

(Bloomberg) -- Zillow Group Inc. jumped in late trading Thursday after the company said it plans to repurchase shares as it makes progress winding down its ill-fated home-flipping business.

Zillow said it had already sold or agreed to sell “more than 50% of the homes it expected to resell during the entire wind-down process,” according to a statement.

The company also said it expects the home-flipping unit, known as Zillow Offers, to generate as much as $2.9 billion in revenue for the fourth quarter, up from a previous forecast of $2.1 billion.

“We are pleased with the progress of our wind-down efforts and recognize that no longer operating Zillow Offers will allow us to have a more capital-efficient balance sheet and business moving forward,” Chief Executive Officer Rich Barton said in the statement. “We see today as an opportune time to announce a share repurchase program.”

Zillow announced last month it was abandoning its home-filliping business. The company finished the third-quarter with roughly 18,000 houses owned or under contract. It has been seeking to sell properties through a variety of channels. That includes bulk sales to institutional landlords. Last month, it agreed to sell 2,000 homes to Pretium Partners.

Zillow launched the home-flipping business in 2018 to compete with an emerging cohort of tech companies that were seeking to simplify the process of selling a home.

But the business ran into trouble in recent months. On Oct. 17, Bloomberg reported that the Zillow would stop pursuing new acquisitions, a move the company blamed on the labor and supply shortages that have roiled the global economy.

It soon became clear that the company had been overpaying for homes. On Nov. 2, Zillow said that it would exit the home-flipping business and write down its inventory of homes by as much as $569 million.