Canadians continue to pay more at the grocery store, with Statistics Canada reporting food prices rose at its fastest pace in August since 1981.

In a report released Tuesday, it found the cost of food climbed 10.8 per cent compared to a year ago.

“The supply of food continued to be impacted by multiple factors, including extreme weather, higher input costs, Russia's invasion of Ukraine, and supply chain disruptions,” StatsCan said in the report. 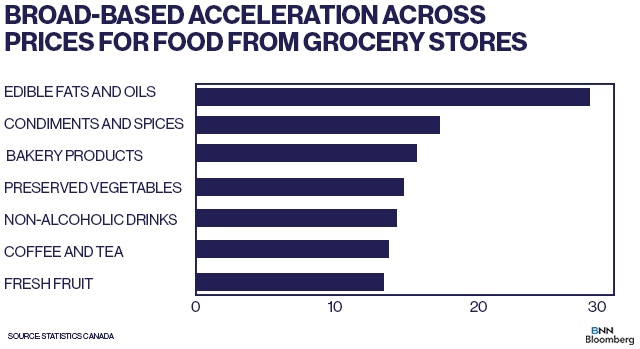 Condiments, spices and vinegars increased the most in August by 17.2 per cent, followed by bakery products (15.4 per cent) and non-alcoholic beverages (14.1 per cent.)

Here are the other food-related price changes for August:

Barry Choi, personal finance expert and author of MoneyWeHave.com, said families should consider changing some of their grocery store habits as food prices continue to climb.

“Switching to a value super market can save you big. Quite often these discount supermarkets carry the same products as brand name supermarkets, but are cheaper,” Choi said over email on Tuesday.

He added that Canadians should consider browsing weekly flyers for deals or shopping at stores that offer loyalty programs, in order to save money on grocery bills.

“If food prices continue to rise, Canadians may be forced to trim their budget in other areas, if they haven't already,” Choi said.

“Groceries are essential, so consider cutting things like subscriptions, eating out, and even savings.”

For those who have the means, Choi said they should consider donating to a local food bank as many families will have to rely on them in order to fill their fridge.

THE 'DARK SIDE' OF FOOD INFLATION

Higher food prices are causing many Canadians to cut back the size of their grocery haul.

A report and survey released by the Dalhousie University’s Agri-Food Analytics Lab on Tuesday, found almost a quarter of Canadian residents (24 per cent) aren’t buying as much food amid higher inflation.

Some individuals are skipping meals (7.1 per cent) or paying for their grocery bills with credit cards (6.6. per cent) without knowing when they will be able to pay it off.

“Our food inflation rate has outpaced the general inflation rate for several months now, and that's why a lot of people are noticing higher prices at the grocery store,” said Sylvain Charlebois, director of the Agri-Food Analytics Lab at Dalhousie University, in an interview on Tuesday.

“So now we're seeing Canadians just committing to a different strategy, because they know they don't have much of a choice.”