How lucky Vancouver renters are paying less for luxury housing

Isaiah Boodhoo, 22, thought it was a “complete hoax” when he saw a rental listing on Facebook for a bedroom in a Vancouver mansion for only $1,100 a month.

It turned out the glass chandeliers, luxurious blue drapes, steam room and billiards table were for real. The nine-bedroom home, dubbed “The Castle” by the 14 students who share the property, is apparently owned by an Afghani pop artist, according to Boodhoo.

“Honestly, I would stay here for as long as I could,” he said, sitting on a white couch while sipping from a Slurpee cup. “$1,000 bucks for all this?”

Others may also soon find themselves as lucky as more mansion owners in the city turn to renting to avoid a new tax on empty homes. In the new world of Vancouver’s housing market, where Chinese investors are decamping and low-ball offers are the norm, students can find themselves living in the lap of luxury.

It’s a far cry from the frenzy of a few years ago when the city was at the center of a global property boom. Prices more than doubled in the decade through 2016, outpacing gains in New York and London. But government policies to tame the market—from new taxes to stricter mortgage regulations—have fueled a plunge in sales to the weakest since the global financial crisis. Prices are down 8.5 per cent from their peak in June, according to the Real Estate Board of Greater Vancouver.

The city boasts a thriving tech and tourism scene and sits in the province with the lowest unemployment rate in the country. But the sense of unease in the real estate market is palpable.

With taxes on an empty Vancouver home potentially adding up to 3 per cent in annual levies, homeowners are rushing to lease their homes, according to real estate agents. That’s leading to bargains in a city where the vacancy rate has been near zero per cent.

“You have houses that are worth $4 million renting for $4,500,” said Steve Saretsky, a Vancouver realtor whose popular real estate blog was pointing out cracks in the market even as benchmark prices peaked last year. 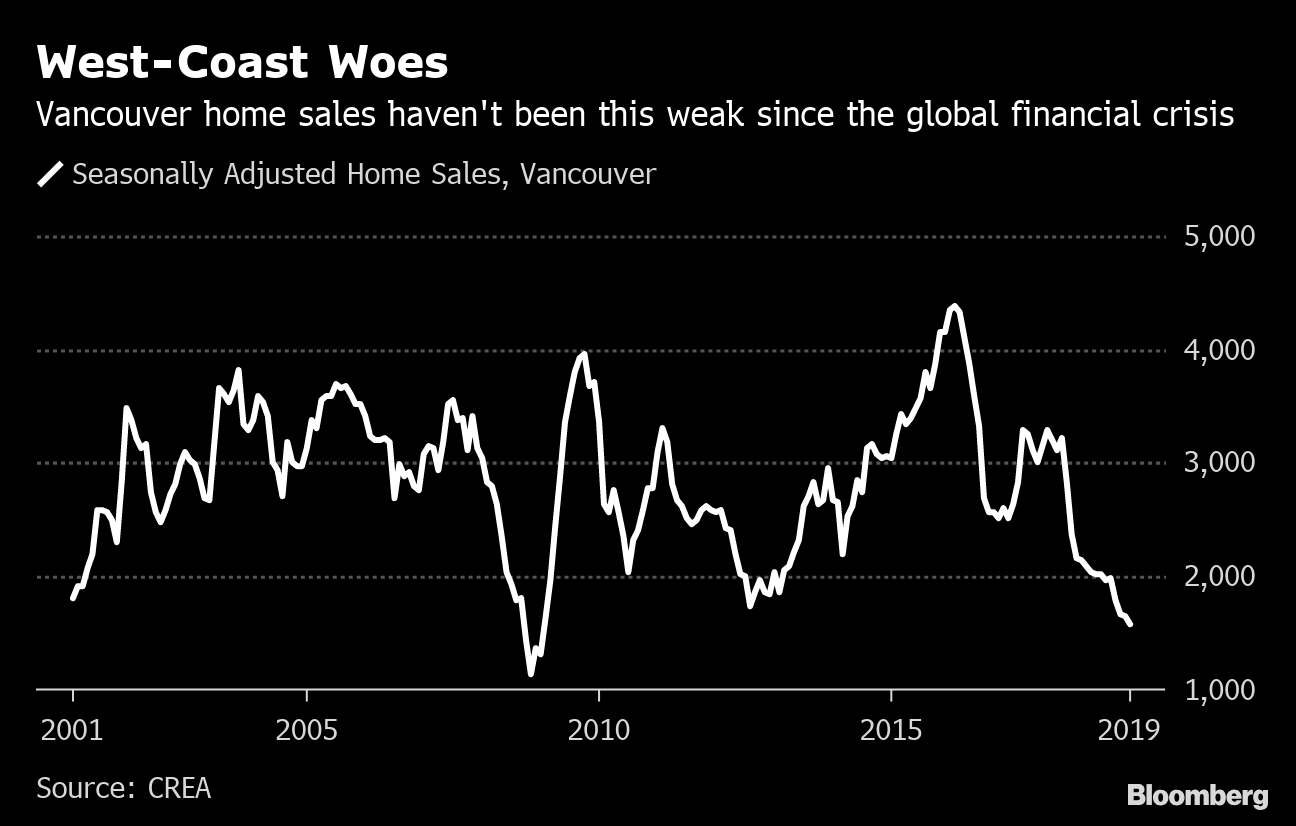 Prospective tenants are getting bold, said Kevin Wang, who runs a sales and rental real estate team with his twin brother Jerry. They’ve received calls from people offering to help with gardening or maintenance in exchange for free rent in a luxury home.

The owner of “The Castle” and the rental agency didn't respond to requests for comment.

For his part, Boodhoo, not only has he scored luxury digs, he’s cut his commute time to his classes in music production to about 18 minutes from two hours.

“Everyday I come home from school and I see just the tips of the castle, and I’m just like, that’s my house,” said Boodhoo, who’s looking forward to the pool in the backyard. It should be filled by June.

Lisa Sun paces around the Vancouver mansion she’s been hired to sell by its wealthy Chinese-Canadian owner. The family’s had it with the new taxes and what it sees as increasing hostility to Asian capital. Sun reckons that early last year the home would have easily sold for about $8.5 million—holes in the wall and all.

Today, the 28-year-old realtor isn’t sure she’ll get a credible offer for the 8,343 square-foot mansion. These days a pool, wine cellar, and home theater on a prime lot aren’t enough to clinch a deal, even in West Vancouver, where opulent homes carved out of steep slopes overlook the ocean. Sun needs a “stager” to empty the house and brighten it up with new furniture, a modern chandelier, and lick of paint.

“I’ve been through only the peak, never the low,” said Sun as she schedules a makeover of the property. Pink tags indicate to the four cleaners what needs to be dumped. The Lamborghini and Rolls-Royce in the garage, relatively unused for three years, also need to be dealt with.

The house is listed at $10.9 million, but after receiving mostly low-ball offers closer to its tax-assessed value of $6.2 million, she’s planning on dropping the asking price closer to $8.3 million.

That’s a hefty cut but holding on to the home would mean paying potentially more than $140,000 in extra taxes annually for the Canadian owner who splits her time between Vancouver and Beijing. Canadian taxes are not the only measures weighing on the market. China’s capital controls are also limiting spending on global real estate.

Sun doesn’t think Vancouver’s market is going to come back to its highs, especially at the top end. “Why would they come here and pay all that tax and feel like a criminal?”

Buying a house seemed an impossible dream for Brandon Chapman.

The 28-year-old financial planner first started looking at one-bedroom condos in 2016, around the peak of the market. “It was just bananas so I took a step back,” he said, in an interview at his Vancouver office.

He’s glad he waited. He now figures he might even be able to afford a detached home and is viewing properties at around the $1.1 million mark in East Vancouver. To make it affordable, he’s teaming up with his best friend to purchase the property—and offering way under asking. It hasn’t quite worked out yet. One offer for about $200,000 less than the listing price was rejected.

“We haven’t closed on anything but the market in my opinion is still trending down so why would I rush into buying something if I don’t need it this second?” he said.

Then there’s Robin Rickards, who happened to be looking for a temporary home at a serendipitous time. The 64-year-old orthopedic surgeon needed a place to stay while his current home was being rebuilt into an oceanside oasis. He ended up making an offer on three different homes and got one for almost $1 million less than the original asking price.

“It’s like a candy store for buyers right now,” Clara Hartree, the realtor working with Rickards, said by email.

The twisty, cantilevered glass tower is one of Vancouver’s most hotly anticipated developments. It starts as a triangle at its base—wedged awkwardly between the on and off ramps of a downtown highway—before swiveling into a square at the top.

That iconic silhouette helped developer Westbank Corp. rapidly sell out some 400 ultra-luxe units when presales began in 2014, thanks in part to avid interest from Asian buyers. As it nears completion, investors are seeking to offload rights to more than two dozen units, according to listings cropping up on realtor websites.

One flyer offers a 368-square-foot unit at $515,000. “Transfer at original price,” it reads in Chinese. Last year, it would’ve fetched as much as $800,000, says Jerry Huang, a realtor with Nu Stream Realty Inc., which specializes in presale developments.

“That’s an insane deal,” he said. Presales were once seen as a slam dunk—put down a 20 per cent deposit, flip the contract at a premium before completion, and pocket the gains.

Westbank said in an email that in the five years since some investors purchased, values have appreciated from 25 per cent to 100 per cent depending on the unit. The number of so-called assignment sales is less than 10 per cent of total units in the building and “in-line with expectation.”

But the broader downturn is beginning to catch some out across various developments.

Those who bought at the peak need to find a buyer fast or come up with the full amount to pay the developer. With banks in some cases assessing units lower than the contract price, buyers hoping for a loan may face a shortfall. "There are no assurances right now," says Adil Dinani, a realtor with Royal LePage—some sellers may be lucky just to break even.

There have always been buyers who overextended and needed to sell quickly.

“But the difference is earlier, we were able to help them because the market was going up,” says Sonny Bhinder, a realtor who’s received calls from half a dozen clients seeking to sell assignments since the start of the year. “The job of the real estate agent has become much tougher now.”

--With assistance from Feifei Shen, Paul Panckhurst and Erik Hertzberg