The tone in global financial markets has turned cautious after a U.S. airstrike killed a top Iranian commander, fueling concern over an escalation in tensions.

The shock news comes after most asset classes had a stellar 2019, with U.S. equities capping one of the best years of the past decade. 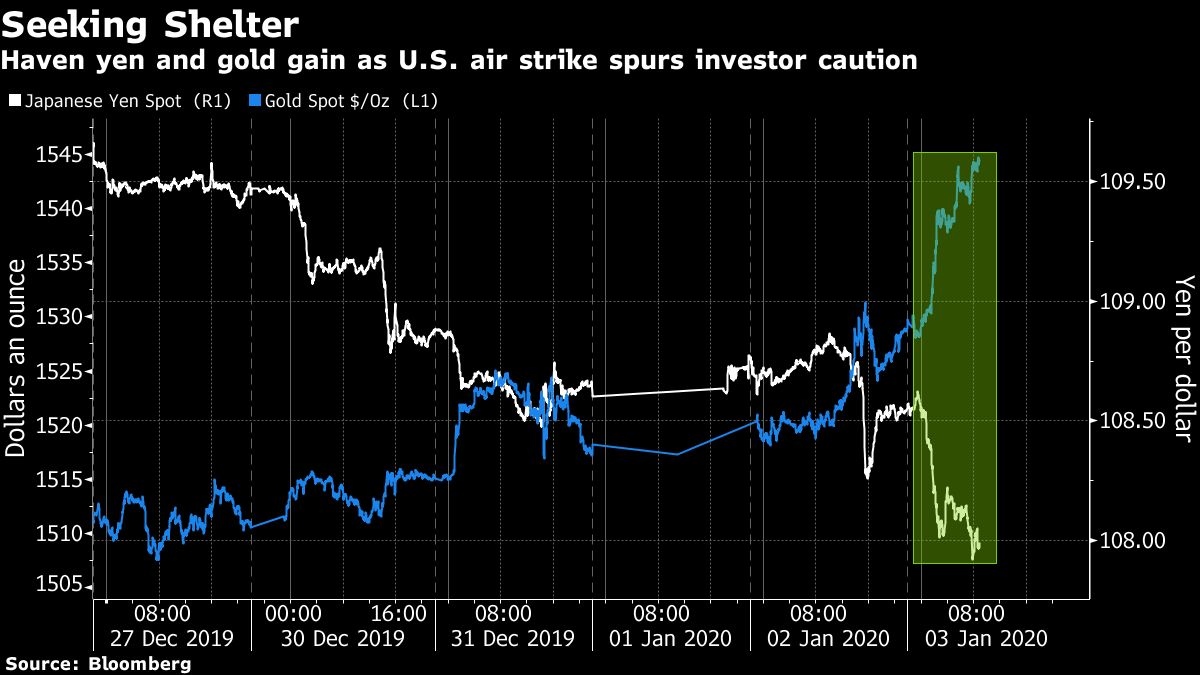 Here are 10 analysts and money managers on what it means for the market outlook:

“If I can find an issue with the market, the forward P/E is now at 18 1/2. It essentially front-ran an expected improvement in earnings, and now those earnings have to come through, which I think they will. But at an 18 1/2 forward P/E, there’s not a lot of margin for error, and so when you add something geopolitical like this, it’s not the same as being at a 15 P/E. And so that leaves the market a little bit vulnerable, at least over the near-term.”

“Gold’s a winner as tension increases, and oil prices are higher too. Bond yields are lower, the equity rally which was underway in the U.S. has stalled but not gone dramatically in reverse, and in the FX market, safe havens and oil-sensitive currencies benefit but it’s the yen which is the clear winner.

“The key level to watch is probably EUR/JPY 120. That probably holds unless there is further escalation.

“Given the scope for tension to persist in the Strait of Hormuz, a protracted period of higher oil prices has to be a risk.”

Valentin Marinov, head of G-10 currency research in London, who calls the timing of the escalation “unfortunate.”

It could “dash market hopes for a rebound of the global economy that is still to emerge from under the cloud of the U.S.-China trade war. Risk sentiment should remain fragile also because central banks may be slow to respond or simply no longer have the arsenal to respond in an adequate way.”

He calls the yen and Swiss franc “attractive,” while saying the conflict could weigh on “risk-correlated oil importing currencies like the Korean won.”

“Recent episodes of U.S./Iran tensions have not resulted in material escalation but even in a fairly benign outcome to this crisis, the bid in U.S. Treasuries and bunds should last at least into next week.”

“The ‘severe retaliation’ aspect is possibly what is scaring the markets as it could mean that there will be a counter-attack versus American diplomats. Markets could use this excuse to take some profits as sentiment and positioning are possibly too high.

“We would then use the possible weakness to increase our equity exposure.”

“We are moving potentially from proxy (Iran) versus proxy (Saudis and U.S.) to potentially direct Iran-backed forces versus U.S. forces.” However, “net-net, I struggle to see what Iran can really do.

“People are still not back at their desks fully until next week to mid-January, so illiquidity could give us some overreaction to the downside. Still, let’s see how the next 24 to 48 hours play out. Remember, it’s the weekend already in the Middle East.”

The gain in oil “honestly feels a touch overdone.” But this is positive for U.S. defense spending and even French defense stocks could get a boost later, he noted.

“So much for Trump calling troops home.”

“This attack merely highlights the geopolitical risk of the oil markets, and the market undergoing a possible oil shortage in the first one to two quarters of 2020.

“We didn’t do anything on the news as we have already bought some oil stocks such as CNOOC and Total when oil was trading close to $60s at the end of 2019.”

“Investors are worried that the situation in Iran will worsen, since there could be some retaliation after the U.S. attack. People will want to cut risk ahead of the weekend. Stocks have rallied a lot in the past month or so, so any bad news flow is a reason to take profit.”

“The reversal of risk-on sentiment will keep Asian FX under pressure. The USD Index also appeared to find a footing. These factors will probably prompt profit-taking flow on EM Asian FX. The magnitude could be amplified by thin liquidity during the New Year holiday.”