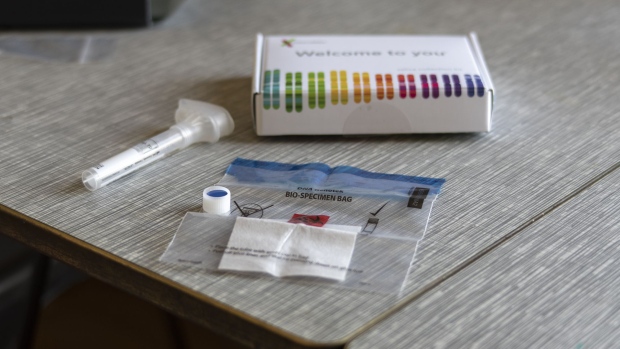 (Bloomberg) -- Consumer DNA-testing company 23andMe Inc. is in talks to go public through a roughly $4 billion deal with VG Acquisition Corp., a special purpose acquisition company founded by Richard Branson, according to people familiar with the matter.

A deal could be announced in the coming weeks if talks are successful, said the people, who asked not to be identified because the information was private. Discussions could still fall apart, the people said.

In 2018, 23andMe had a $2.5 billion valuation, separate people familiar with the matter said. A merger with a special purpose acquisition company, or SPAC, would allow 23andMe to go public without the risk or uncertainty of holding an initial public offering.

Shares of VG Acquisition jumped as much as 18.4% before being temporarily halted in New York trading Wednesday. They traded up 3% to $14.01 apiece at 11:55 a.m.

Representatives for 23andMe and VG Acquisition declined to comment.

Co-founded in 2006 by Anne Wojcicki, 23andMe sells direct-to-consumer genetic testing kits. The company launched with the aim of using genetics to kick start a personalized health-care revolution, with a $1,000 test that could alert customers to potential health risks.

It was forced to pull the product from market by the Food and Drug Administration, pivoting to ancestry testing and later re-launching a health-care test after gaining agency approval.

On Wednesday, the company launched a COVID-19 Severity Calculator, which calculates a person’s risk of being hospitalized due to the virus.

23andMe has raised $869 million in private funding to date and counts GlaxoSmithKline Plc, Sequoia Capital and Fidelity Management among its backers. The company cut jobs at the beginning of 2020 as the once-booming genetic testing business slowed on consumer concerns over privacy.

VG Acquisition raised $509 million through an initial public offering in October. Although Branson is the founder, he isn’t a director of the company. The blank-check firm intends to search for targets that operate in consumer-facing industries in the U.S. and Western Europe, according to its prospectus.