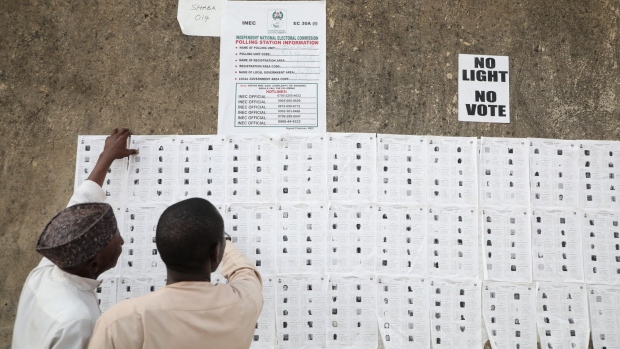 People check their names on the electoral roll ahead of casting their votes at a polling station in Kaduna. Photographer: Kola Sulaimon/AFP/Getty Images , Photographer: KOLA SULAIMON/AFP

(Bloomberg) -- Young Nigerians have registered in numbers to vote in crucial presidential elections taking place in 43 days in Africa’s most populous nation, a sign of intense youth interest in who leads the biggest democracy on the continent, data from the nation’s election body shows.

Nearly 40% of the 93.5 million Nigerians who registered to vote in next month’s presidential election are under 35 in the West African nation where the median age is 18, but the political class is largely made up of people two or three generations older.

Over 37 million voters are aged 18-34, including 7.2 million new voters, while another 33 million are aged 35-49, according to data released by the Independent National Electoral Commission.

“That is a bold statement by young citizens,” Cynthia Mbamalu, director of programs at the EU-backed nonprofit, YIAGA Africa, said from Abuja, the nation’s capital. Anti-police brutality protests that swept the country in 2020 “were a wake-up call on the state of the nation and the need for youth participation in government,” she said.

The continent’s biggest economy will elect a new leader on Feb. 25, replacing outgoing President Muhammadu Buhari, an 80-year-old former military dictator who got elected as a civilian president in 2015, and completes his second and final term in May.

Whoever emerges as Nigeria’s president will have to contend with stark economic deterioration, sticky inflation, rising debt service costs and insecurity.

(Corrects number of registered voters to 93.5 million in first deck headline, percentage of voters under 35 to 40% in second paragraph, and number of voters aged between 18-34 to 37 million in third paragraph of story published on Jan. 12)