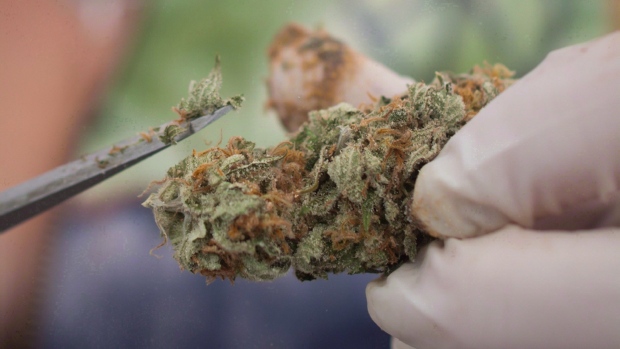 A vendor trims marijuana with scissors during the annual 4-20 cannabis culture celebration at Sunset Beach in Vancouver on April 20, 2017 , The Canadian Press/Darryl Dyck

TORONTO -- A report released on Monday suggests that 87 per cent of Canadian cannabis companies believe that consolidation is inevitable over the next three years, leaving only a few large players post-legalization.

Consultancy firm EY's survey of 11 licensed producers with varying size and scale — among the approximately 50 licensed producers in the country — also showed that 75 per cent of the respondents believe the market will be dominated by the entrance of big players such as tobacco, pharmaceuticals and alcohol.

Recognizing that there is substantial opportunity in the cannabis industry, these established industries are expected to enter this space and try to leverage existing competencies and assets, the report said.

The majority of the study's participants also said they believed niche players will grab a smaller share of the market through innovation, namely by creating new products or derivatives.

In the survey, 75 per cent said they believe the demand for various derivatives such as edible products or infused products will increase in the coming years as the opportunity to convert a segment of consumers who might consume cannabis or derivatives for recreational purposes or for medical applications grows.

"They drew a comparison to the alcoholic beverage industry and the fact that there are craft brewers and players," said EY Canada advisory partner Monica Chadha.

"So a few big players and then, again, the industry will also be comprised of smaller niche players that really won't be major competitor."

But a big question mark surrounding derivatives is where products such as edibles will be legal in Canada since regulations aren't clear just as of yet, Chadha added.

EY's report said there is a consensus among companies in the cannabis space that the sooner provincial governments roll out their regulatory frameworks, the easier it will be for them to make strategic longer-term investments.

Most respondents in the survey also said they do not believe that the black market will disappear completely at the onset of legalization. The extent to which the black market products will be eradicated will depend largely on government regulation — specifically, the level of taxes imposed on cannabis, retail price of the product, accessibility and ease of purchase will dictate the demand for black market goods.

Speculation that a wave of consolidation is coming to Canada's marijuana industry, in which larger players buy smaller ones to build scale, was sparked last Wednesday when Saskatoon-based CanniMed Therapeutics Inc. (CMED.TO) said it needed time to review an unsolicited takeover offer from Aurora Cannabis Inc. (ACB.TO), a rival marijuana producer in Vancouver.

That same week, CanniMed announced it had reached a deal to acquire Toronto-based Newstrike Resources Ltd. (HIP.V), a producer endorsed by members of rock band The Tragically Hip.

Aurora announced earlier today that it's proceeding with a hostile all-stock takeover attempt for CanniMed after failing to reach an agreement with the company's board by last Friday.