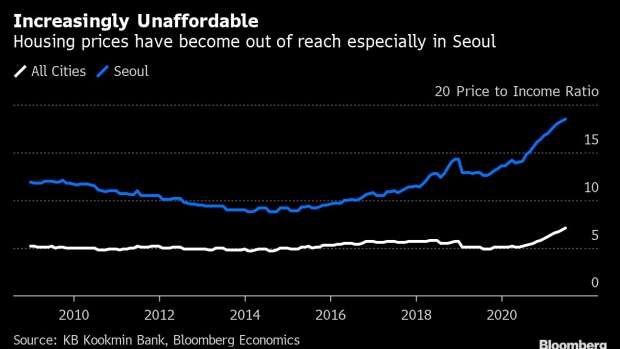 (Bloomberg) --  The Netflix Inc. hit Squid Game may be a big win for South Korea’s entertainment industry, but it has also exposed the country’s darker side to a global audience.

Decades of super-charged growth have left a deeply stratified society, where soaring house prices and a lack of social mobility fuel excessive borrowing. Discrimination against women, the elderly and migrant workers are deeply entrenched and many younger people find life such a grind they're giving up all together.

Amid the shocking violence and eerie aesthetic that has made the series Netflix’s biggest launch ever, Squid Game’s depiction of desperate contestants betting their lives to win 45.6 billion won ($39.1 million) while super-rich VIPs watch on contains many realistic moments true to Koreans’ everyday struggles. Here’s a scene-by-scene guide (warning, spoilers throughout) to some of those issues:

The reaction from Seong Gi-hun, the show’s gambling addict protagonist, to his mother giving him 20,000 won ($17) encapsulates life for the have-nots in a country where inequality is worse than in the Japan, Australia and Spain.

The exchange takes place in their semi-basement home in Ssangmun Dong, the northern neighborhood of Seoul that is in direct geographic and economic opposition to the affluent Gangnam area.

These cramped flats built half below ground level, where the characters of the 2020 Oscar-winning film Parasite also live, have become the last resort for Korea’s underclass as apartment prices have surged 70% in the past five years, pushing the average price of an apartment in Seoul beyond $1 million.

The so-called ‘banjiha’ homes have proliferated since the 1970s after the government required all low-rise buildings to have basements as bunker spaces, in case of a military threat from the North. Then as urbanization brought an influx of workers to Seoul with no space to live, officials legalized the renting out of these underground homes to ease the housing crunch.

The Land Ministry estimated 1.6% of Korean households lived in basement or rooftop settings as of last year, down from 4% in 2006.

Banjiha homes have become a symbol of a yawning inequality that has worsened during the pandemic. The Bank of Korea estimates the Gini coefficient, a global measure of inequality that ranges from zero to one with a lower reading indicating better equality, deteriorated to 0.399 in the second quarter of 2020, from 0.379 a year earlier, as lower-earning households lost jobs.

A major reason for the imbalance is that the country’s sprawling family-owned chaebol groups still control large swathes of the economy, and those who don’t work for chaebols are largely shut out of economic advancement.

A report by the Korea Enterprises Federation this month showed new college graduate hires at large companies, defined as more than 300 employees, earned an average base salary of 43.2 million won ($36,900) in their first year. That compares with 28.3 million won ($24,250) for those employed at small companies (30-299 employees), and 25.6 million won ($21,940) for workers at even smaller firms (less than five employees).

This means that one’s track is often set at a young age, with little prospect for advancement later in life.

The first episode makes clear that crushing debt is the central theme of Squid Game, with Gi-hun’s debt of 160 million won ($137,000) to loan sharks and another 255 million won ($218,490) to banks used to convince him to join the game. There, he meets 455 other players also facing loans they can’t repay.

Household debt is a real and acute problem in Korea, especially among the middle-aged who entered the job market just as the Asian Financial Crisis struck in the late 1990s. Statistics office data shows households owed an average 82.6 million won ($70,173) in 2020, up 4.4% from the previous year, while annual income rose just 1.7%.

Overall debt owned by households surged 10% in the second quarter, fueled by cheap borrowing costs during the Covid pandemic and years of policy missteps which made home prices out of reach. That’s taken the ratio for debt-to-disposable income to an unprecedented 172%, and prompted the central bank to raise rates in August in a first such move among developed Asian economies.

The Bank of Korea is walking a tightrope between discouraging households from further borrowing and driving those already indebted into worse straits as repayment costs grow—the latter a quandary the Squid Game players are all in.

In the show, Gi-hun’s gambling and debt problems started after he was sacked from the fictional Dragon Motors during restructuring, a clear reference to the 2009 mass layoffs at the troubled Ssangyong Motor Co.  He then went into debt opening two eateries that failed, a familiar path for many laid off in middle age.

The Ssangyong Motor strike, which lasted for more than two months and grew violent, lingers in the national memory over a decade later as a symbol of the trauma inflicted by the financial crisis.

Lee Chang-keun, a worker who was fired from Ssangyong Motor and eventually rehired, wrote in a Facebook post that Gi-hun represents the more than 2,600 sacked staffers who struggled to make ends meet: “a laid off worker that doesn’t lose dignity in the face of life-threatening situations and still shows warmth.”

The grim reality of life for migrant workers in Korean society is reflected in the character of Ali, originally from Pakistan, who demands months of back pay from his employer.

Throughout the desperate exchange, he addresses his Korean employer as “sajangnim,” which literally means chairman or president of a company. The way Ali uses this honorific on almost everyone around him illustrates the low status that migrant workers are expected to embrace, while they’re spoken down to and discriminated against; at one point, his employer says “how dare you touch me.”

As Korea’s economy evolved, it relied on immigrant labor to fill in the gap for low-paying, physical manufacturing labor that locals weren’t willing to take on. Of the 848,000 foreign workers in South Korea in May 2020, slightly less than a third were on a so-called E-9 visa, or non-professional visa, a common way of entrance for workers from places like Cambodia, Vietnam, Nepal and South Asia.

Citing statistics from the labor ministry, the Korea Herald said that migrant workers have reported more than 150 billion won ($128.5 million) in unpaid wages last year, tripling from 50 billion won in 2015.

In an unintended reflection of the country’s enduring ignorance about migrant workers, the actor who plays Ali—Anupam Tripathi—is Indian, not Pakistani.

The plight of elderly Koreans is reflected in the show’s early episodes by Player 001, Oh Il-nam, a frail old man who’s pushed to the sidelines by fellow participants. When Oh volunteers to keep watch during the night for attacks from other teams, Player 196 dismisses his offer.

The government estimates that Korea’s share of elderly people will reach 39.8% by 2050, up from 16.5% this year— the fastest pace of ageing in the world.

Further complicating Korea’s demographic woes is its elderly poverty rate, the highest in the OECD. While the official retirement age is 60, many workers are forced into early retirement in their late 40s and 50s as companies undergo restructuring.

The rigidity of the labor market makes it almost impossible to find another decent job at their age, which means depleting their savings or trying to start small food businesses—as the heartbroken mother of series villain Cho Sang Woo does after her son disappears.

In a statistics office survey of those aged 55 to 79 this year, 68% said they wish to continue working mainly to earn living expenses. That ratio has been rising steadily since 2015.

The widespread gender discrimination and misogyny present in Korea is a recurring theme in the series, brought to life through the character of Han Mi-nyeo, whose name literally translates to “beautiful woman.” While she has to use her sexuality to butter up stronger male participants, she’s ultimately left begging to be included in their team.

The scene has resonated with women in Korea, where gender discrimination has become less overt but still permeates institutions and everyday life. Despite policy efforts, women earn 30% less than male workers, by far the biggest pay gap among the 38 OECD countries.

That disparity has been exacerbated by the Covid-19 pandemic, as women vastly outnumber men in sectors that have been hit hardest by virus restrictions.

Woman have outperformed men in entering college in Korea since 2005, with the female entrance rate 7.9 percentage points higher in 2018. Yet a notable drop in female labor participation in their mid-30s and 40s speaks to the impossible task of both holding down a career and raising children.

In a society where men still barely participate in domestic life, women are increasingly opting out as well: Korea’s fertility rate sank to 0.84 last year, the lowest in the world.

As for Han Mi-nyeo’s inability to pursue higher education: fees up to high school are largely free, but Korea’s notorious “cram schools” that help students get into the top universities are a massive barrier to entry. Households spent some $8 billion on this extra-curricular coaching last year, and kids from lower-income families usually can’t afford to compete.

Kang Sae-byuk is a North Korean defector who wants to win the prize money to smuggle her mother past the border and take her brother out of an orphanage. Her character represents a group that goes to great lengths to reach the South, only to struggle to find a job and fit in.

North Koreans that try to defect though the Chinese border—a common route as it’s less fortified than the demilitarized zone dividing the Korean peninsula—are often found by the Chinese authorities and forcibly returned, according to a 1986 agreement with the North Korean regime to prevent “illegal border crossings.”

Those returned to the North face torture, imprisonment, sexual violence, and forced labor in their country, according to Human Rights Watch in a July report. It believes at least 1,170 North Koreans are currently being held in detention by the Chinese government.