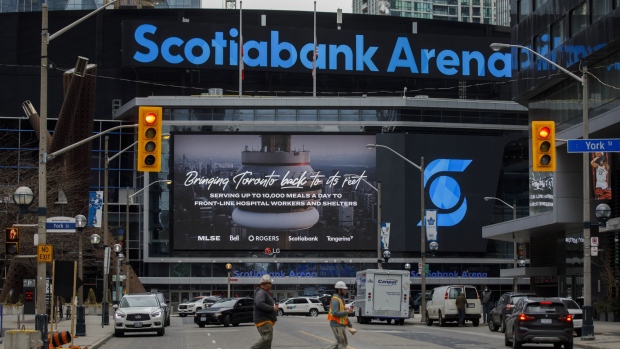 Traffic moves past the Scotiabank Arena in Toronto, Ontario, Canada, on Friday, April 24, 2020. Maple Leaf Sports & Entertainment (MLSE) and their partners are looking to prepare and deliver 10,000 meals a day for front-line health-care workers and vulnerable community members. , Bloomberg

(Bloomberg) -- Canada defeated Sweden to win the world junior hockey championship in January 2018, a victory watched by a huge audience in a hockey-obsessed country.

Five months later, members of that celebrated team attended a charity event in an Ontario city, where they allegedly sexually assaulted a young woman in a hotel room. The accusation and the cover-up are now shaking the upper echelons of hockey in Canada.

The government has launched a forensic audit of Hockey Canada, the sport’s governing body. Several large companies including Bank of Nova Scotia and Telus Corp. have frozen, withdrawn or redirected millions of dollars in sponsorship and funding. And lawmakers are now asking whether anything can be done to clean up the rot inside the nation’s favorite sport.

Hockey Canada has paid out C$8.9 million ($6.9 million) to settle more than 20 claims of sexual misconduct since 1989, officials told a parliamentary hearing on Wednesday. Some of that money came from an “equity fund” that was partly funded by registration fees of young players -- without the knowledge of the families paying them.

Hockey Canada Chief Executive Officer Scott Smith, who testified for more than two hours on Wednesday, was told by multiple lawmakers that he should resign. He has been in the job less than four weeks, when he replaced Tom Renney, a former New York Rangers coach.

“We have lost confidence in Hockey Canada. I think it is time for new leadership,” Peter Julian, a New Democratic Party lawmaker from the Vancouver suburbs, said.

One of the payments was to the woman in the 2018 incident, which allegedly involved eight junior hockey players. The woman filed suit for C$3.55 million and settled for an undisclosed amount. She said in court documents that Hockey Canada was aware of the alleged assaults and that it failed to properly investigate the accused players, who have never been publicly named.

“Why did you not continue to investigate if you really wanted to change the culture of hockey?” Karen Vecchio, a Conservative member of parliament from Ontario, pressed Smith during Wednesday’s hearing.

Not a ‘Real Investigation’

Earlier testimony from Hockey Canada officials had left lawmakers stunned: Smith said only 12 or 13 of the 19 players were interviewed in the organization’s initial probe. They also said that they were unable to determine who was involved, and that no players had been suspended.

“That’s a sign that this wasn’t a real investigation,” said Ann Pegoraro, Lang Chair in Sport Management at the University of Guelph. “If you don’t make it mandatory to be part of an investigation into a complaint of this nature, then you’re essentially telling them it’s OK.”

That prompted the federal government to freeze its funding of Hockey Canada and launch the audit. Then came the corporate backlash.

Electronic Arts Inc., maker of a video game series based on the National Hockey League, called the allegations “deplorable” and said that it intends to shift funds to national teams including the Canadian women’s national hockey team.

With business development and partnerships accounting for 43% of Hockey Canada’s budget, corporate sponsors have significant influence on the organization.

“They’re the lever that made Hockey Canada stand up and change,” Pegoraro said. “It’s an indication that we needed corporations to be our moral guide in this, versus individuals inside that entity or inside the sport system. It’s going to take a while for Hockey Canada to build back trust with those sponsors.”

Smith, who has been with Hockey Canada since the 1990s, is counting on contrition and a new set of policies to quell the controversy. The organization’s new plan includes mandatory sexual assault prevention training, “character screening” for elite players and the threat of lifetime bans for players who refuse to participate in investigations, among other steps.

“My attitude is also focused going forward on delivering on an action plan to ensure that these events never happen again,” Smith testified.

For many, those measures are far from enough. Marie-Philip Poulin, the only hockey player ever to score in four straight Olympic finals, posted a letter to Smith and other Hockey Canada executives on behalf of the women’s national team.

“There is much more work and action needed to fully address the underlying issues in order to ensure that a new Hockey Canada emerges from this crisis,” the letter said. It’s time, the players added, “to have women sitting at the table.”