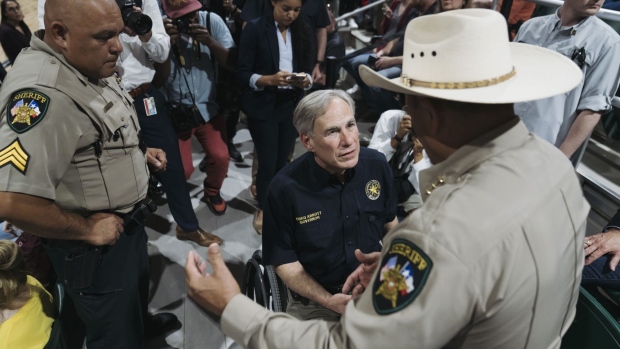 Greg Abbott, governor of Texas, speaks with sheriffs during a vigil for victims of the Robb Elementary School shooting in Uvalde, Texas, US, on Wednesday, May 25, 2022. President Joe Biden mourned the killing of at least 19 children and two teachers in a mass shooting at a Texas elementary school on Tuesday, decrying their deaths as senseless and demanding action to try to curb the violence. , Bloomberg

Abbott, the pro-gun Republican leader of the second-largest US state, was scheduled to be among GOP luminaries speaking ahead of former President Donald Trump’s appearance at the NRA gathering in Houston on Friday. The governor, who faces re-election in November, is the highest-ranking Republican to pull out of the NRA event since the massacre.

Abbott plans to be at the site of this week’s massacre that killed 19 children and two adults in Uvalde, Texas, on Friday afternoon for a media briefing, according to a tweet from the governor’s office. Uvalde is some 277 miles (446 kilometers) from Houston.

The governor will deliver a pre-recorded message to the NRA event in lieu of an in-person address, the newspaper reported. Abbott’s office didn’t immediately respond to a request for comment.