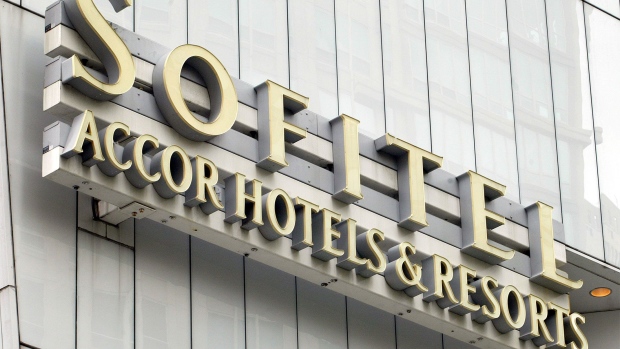 CHICAGO - JUNE 17: Sofitel/Accor Hotels & Resorts signage is seen at its Chicago Water Tower hotel June 17, 2004 in Chicago. Sofitel Chicago Water Tower, the North American flagship property for Sofitel, has been chosen by the Chicago chapter of the American Institute of Architects as the "best new building in Chicago in the last ten years." The 350,000-square-foot, prism-shaped structure was designed by Paris-based architect Jean-Paul Viguier. (Photo by Tim Boyle/Getty Images) , Photographer: Tim Boyle/Getty Images

The company, which has 3,500 employees in Russia, said it halted all services to hotels whose owners are under U.S. or European sanctions, as well as work on five hotels in development in Russia. It has also paused loyalty programs with Russian partners. Accor doesn’t own any of its hotels in Russia, and it’s the decision of local hotel owners whether a property should be closed.

Accor has seven hotels in Ukraine: four in Kyiv, two in Lviv and one in Odesa. One hotel remains open for guests in Lviv, while the others are being used to shelter employees, their families and members of the media, a company spokesperson said. Although none of the buildings has sustained damage, some of the fighting has gotten close. One hotel in Kyiv is located near a railway station that was bombed.

Accor is one of the largest hotel operators in the region, with 85 hotels in Poland, 20 in Hungary, and one in Moldova. It has been working with local authorities and NGOs to provide humanitarian relief. Currently 15 of its hotels are accommodating refugees, including five in Paris.