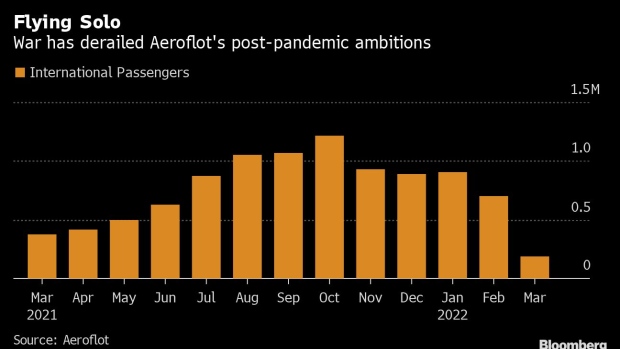 An Airbus SE A350-941 passenger aircraft, operated by Aeroflot PJSC, takes off from Blagnac Airport in Toulouse, France, on Tuesday, Feb. 15, 2022. Airbus sees the Asia-Pacific region needing more than 17,600 new planes over the next two decades as travel rebounds from the coronavirus pandemic and older and less fuel-efficient models need replaced. Photographer: Matthieu Rondel/Bloomberg , Bloomberg

(Bloomberg) -- Hours after President Vladimir Putin announced Russia’s invasion of Ukraine, Aeroflot PJSC’s top executives gathered at the airline’s headquarters down the street from the Kremlin.

In the official part of the surreal board meeting, they discussed the flagship Russian carrier’s budget without mentioning the war or any risks it might create, according to two people familiar with the proceedings who asked not to be identified because they weren’t public. But on the sidelines, some executives found little beyond curse words to describe the airline’s prospects, one of the people said.

Within weeks, the company’s top executive, the head of its lowcoster unit and its strategy chief would resign their posts.

Aeroflot succeeded over the last two decades in turning itself from a punchline about Communist-era service into an award-winning international carrier flying one of the youngest fleets in the world. It now faces a future that looks much like its Soviet past and, with its Boeing Co. and Airbus SE jets cut off from parts and service, it is shifting its focus to domestic routes and locally produced planes as the impact from unprecedented economic sanctions on Russia becomes clearer.

“Aeroflot was built up to a global standard but will be a shadow of itself, able to fly only to those parts of the world willing to do business with Russia,” said Christopher Granville of London-based consultancy TS Lombard. “This is a mirror for the Russian economy as a whole, now cut off from the Western-led economic system.”

Aeroflot’s press service did not respond to a request to comment on the board meeting or its prospects.

Aeroflot had been a flagbearer of Putin’s Russia Inc., demonstrating a state-owned company could offer first-rate service in the competitive international travel industry. Since the war began, it’s problems have become a symbol of Russia’s isolation.

In March, in response to a European Union order to repossess planes leased to Russian airlines, Putin authorized the seizure of leased commercial aircraft. Aeroflot in short order halted all international flights except to Belarus. It has since cautiously restarted service to 13 countries, down from 56 before the war, most recently to the Maldives.

The measures have taken a toll, with the number of international passengers Aeroflot Group carried in March down by half from a year earlier to 189,000.

The pain will likely get worse. The vast majority of the group’s more than 350 planes are Airbus or Boeing models, and it is facing a looming parts deficit. Aviation data specialists IBA estimate Russian airlines have supplies to last three months and then may start cannibalizing aircraft for parts.

A push to replace imports with Russian-built passenger planes championed by Putin since his first term can’t compensate for the shortfall. The regional Sukhoi Superjet, which has had two fatal accidents in the last decade, relies on an engine made in partnership with France’s Safran SA. The timeline for mass production of the larger Irkut MC-21 has been pushed back by up to two years as it seeks to source parts domestically, Deputy Prime Minister Yury Borisov said on state TV in March.

Still, plans for domestically-produced engines for the Superjet and MC-21 are a long way off, according to Rob Morris, global consultancy chief at aviation analytics firm Cirium. Russia instead plans to ramp up production of the less efficient Soviet-designed Tupolev Tu-214. That’s also problematic, Morris said.

“The Tu-214 has been in extremely limited or virtually no production for a number of years with only five customer deliveries in the past five years, simply because it is an uncompetitive plane both in terms of performance as well as efficiency,” he said.

In the decade after the breakup of the Soviet Union in 1991, what had been the world’s biggest airline was transporting as few as 3 million people a year. Aeroflot was plagued by a spate of deadly accidents, including a flight from Moscow to Hong Kong that crashed after the pilot gave control of the plane to his teenage son.

As Russia grew more prosperous and loud Russian-made jets fell short of stricter noise pollution standards adapted in the EU in the early 2000s, Aeroflot increasingly turned to foreign planes to replace its Ilyushins and Tupolevs. It rebuilt Sheremetyevo airport and joined the SkyTeam alliance with other airlines.

Despite the Covid-19 pandemic leading to losses in the last two years, Aeroflot aimed to increase passenger numbers from its post-Soviet record of 61 million in 2019 to 130 million by 2028 by exploiting Moscow’s position as a hub between Asia and Europe.

Now those goals appear headed for the dustbin of history, with Aeroflot declining to publish its first quarter financial results. SkyTeam suspended its membership and travel booking firms Sabre Corp. and Amadeus IT Group SA terminated distribution agreements. Even Manchester United football club pulled out of a longterm sponsorship deal.

The specter of Iran’s hobbled aviation industry, where decades of US sanctions have devastated the Islamic Republic’s aviation sector, hangs over the company. The EU banned most of Iran Air’s fleet from its airspace on safety concerns, while the country relies on a network of middlemen to skirt restrictions and procure spare parts.

As it adjusts to the new reality, Aeroflot’s board approved an issue of as much as 186 billion rubles ($3 billion) in shares in May to stabilize its finances. The government is ready to use money from its sovereign wealth fund to help recapitalize the airline, the Interfax news service reported in April, citing an unidentified person.

Still, the airline that declares its mission is to help customers “see the world in all its diversity” likely will have to contend with reduced horizons.

“Aeroflot will be to a very large extent a domestic airline for the foreseeable future,” said Arnold Barnett, an air safety expert at the MIT Sloan School of Management.