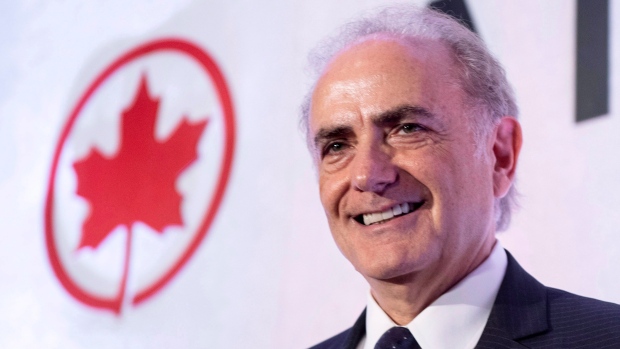 MONTREAL -- Air Canada and Chorus Aviation Inc. have extended a purchase agreement by 10 years that will see Chorus subsidiary Jazz Aviation LP continue to provide Canada's biggest airline with regional service through to 2035.

The agreement Monday tacks on another $940 million in aircraft leasing income and fixed fees flowing to Chorus over the next 17 years, swelling the revised contract's worth to $2.5 billion in total, the holding company said.

The amendment to an agreement from 2015 includes lowering the fixed fees and other revenue that Air Canada hands to Chorus by about $50 million annually for 2019 and 2020, a tradeoff for the buffed-up, longer-term contract now in place.

Both companies characterized the deal as a "win-win."

Air Canada chief executive Calin Rovinescu said the contract offers his company long-term stability, cost certainty and "the flexibility to modernize the regional fleet for the benefit of our customers."

Chorus CEO Joe Randell, who helped launch Jazz in 2002 -- then still a branch of Air Canada -- acknowledged the unease over the previous agreement's expiry date in 2025.

"There has been some concern about where does Jazz sit in Air Canada's plans and how long is this relationship going to last," Randell said on a conference call with investors. "This really puts those concerns to bed."

Investors cheered the deal and sent shares of Halifax-based Chorus up 15 per cent to close at $7.24.

Under the new agreement, Air Canada will make an investment of $97.3 million in Chorus, giving the airline about 10 per cent of Chorus's class A and class B voting shares, cumulatively.

Chorus aims to use some of the proceeds from that investment to buy new, larger-gauge aircraft, including nine CRJ900s for lease to Air Canada in 2020, Randell said.

Air Canada is committed to lease 105 aircraft annually from now through 2026, and at least 80 aircraft in the 75-to-78 seat range each year from 2026 through 2035, according to Chorus. Those leases will yield $1.6 billion in revenues, nearly two-thirds of the contract's worth going forward.

"The most important element of the new CPA is the 10-year extension to 2035, as it meaningfully reduces the potential 'cliff risk' of an unextended CPA," he said in a note to investors.

Cameron Doerksen, an analyst with National Bank Financial, stressed "certainty and predictability" for the two companies and their investors.

Previously, the fees Chorus charged Air Canada for controllable costs such as labour were set annually, but could fluctuate broadly from year to year.

The amended deal installs "guardrails" so that the fees -- while lower than originally contracted over the next two years -- shift within a range of plus or minus $2 million yearly, ensuring more predictability, Chorus said. The fee total will add up to about $858 million.