Air Canada shares dropped after the company said that it will make “meaningful” reductions to its summer flight schedule in order to quickly bring passenger volumes down to a manageable level.

Canada’s largest air carrier fell 6 per cent on Thursday, recovering slightly from an 8.8 per cent tumble in intraday trading -- its biggest drop since early March -- as investors balked at its post-pandemic operational disruptions. Air Canada said it plans to cut 154 flights per day, on average, for the next two months; the carrier operates about 1,000 daily flights.

“This surge in travel has created unprecedented and unforeseen strains on all aspects of the global aviation system,” Michael Rousseau, chief executive officer of Air Canada, said in an email to customers Tuesday night. 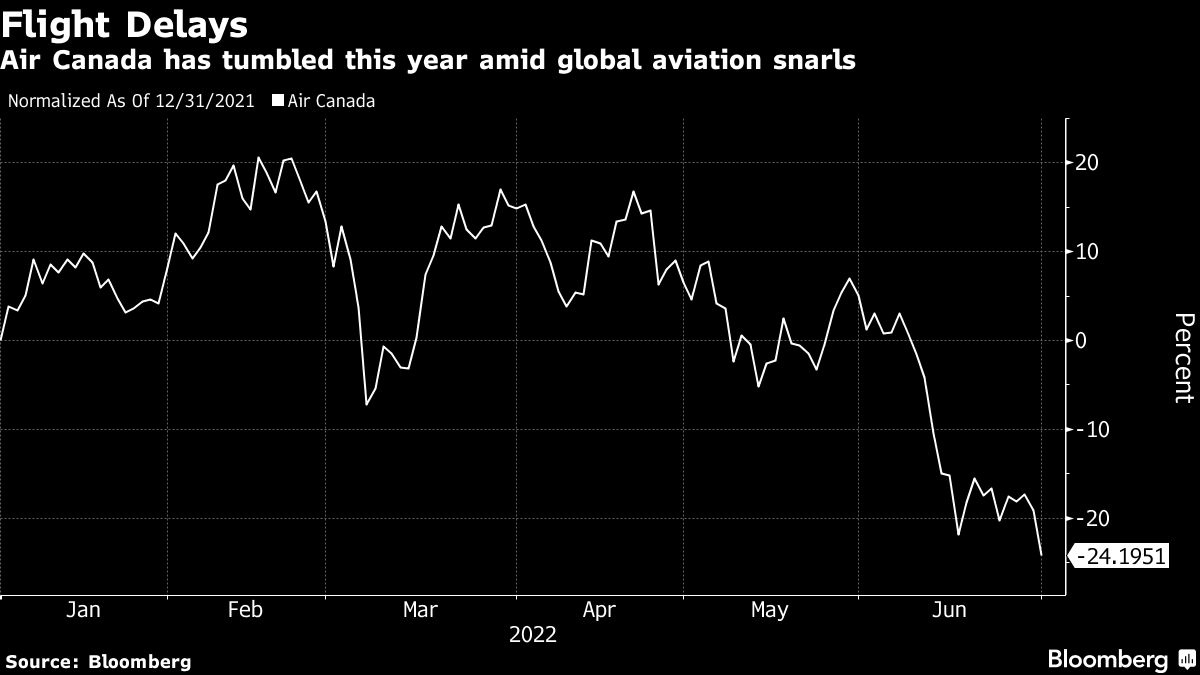 The changes will primarily reduce the frequency of smaller flights in the evening and late at night on domestic and US routes. But the airline will also suspend flights between Montreal and three cities -- Pittsburgh, Baltimore, and Kelowna -- and between Toronto and Fort McMurray.

The Toronto and Montreal hubs will be the most affected, while international flights will remain mostly unchanged.

Scotiabank analyst Konark Gupta said that unlike US carriers, the key factor behind Air Canada’s cancellations is not a labor shortage, but instead is the result of a lack of airport workers, including security and customs officers. He reduced his third quarter estimates slightly for the carrier, but said that airlines should still benefit from robust demand for international travel.

Air Canada “is not the only airline facing these issues, which are already well known to the market given the U.S. airlines had been canceling flights, while raising revenue guidance,” Gupta said in a note to clients.

Airlines around the world have been struggling with the return to pre-pandemic levels of travel, as they face a series of problems such as COVID travel restrictions, labor shortages, and restricted supply chains that lead to flight delays.

WestJet has adjusted its summer schedule six times to plan for operational challenges and avoid short-notice cancellations, as it cut capacity by 25 per cent this July compared to the same period in 2019. The airline is “taking painful and also expensive steps to stabilize the system,” Chief Executive Alexis Von Hoensbroech said in an interview with BNN Bloomberg Television.

Air Canada said it has increased investments in hiring, aircraft, and equipment, but changes are necessary to restore “operational stability.”