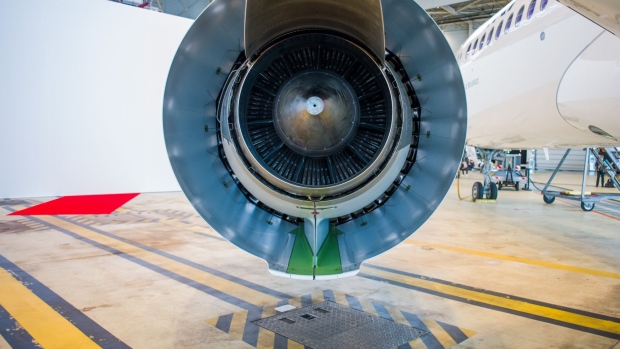 An engine on a new Airbus SE A220 narrow-body passenger jet during its unveiling by Air-France-KLM at Paris Charles de Gaulle airport in Paris, France, on Wednesday, Sept. 29, 2021. The A220s will replace 51 Airbus A318s and A319s with an average age close to 17 years that operate a significant chunk of Air France’s intra-European operations. Photographer: Nathan Laine/Bloomberg , Bloomberg

The partnership with Airbus will study how to bring so-called green hydrogen to aircraft and airports, with the world’s largest planemaker providing insight on hydrogen aircraft and Plug Power designing non-polluting hydrogen infrastructure at airports, the companies said Wednesday in a statement. Airbus has a goal of bringing zero-emission aircraft to market by 2035.

Phillips 66 is also teaming up with Plug Power to develop low-carbon hydrogen and deploy that technology within the U.S. oil refiner’s operations. Objectives include scaling low-carbon hydrogen in the industrial sector and increasing hydrogen fueling for transportation, the companies said Wednesday in a separate statement.

Green hydrogen is produced with renewable energy sources like solar or wind and can be used to power vehicles, ships or industry that traditionally burn fuels that emit greenhouse gases. It’s seen as a potential source of energy that could help the U.S. and other nations reach their carbon-cutting goals and avoid the worst effects of global warming.

Plug Power created the first commercially viable market for hydrogen fuel cell technology and has become the world’s largest buyer of liquid hydrogen, according to the Latham, New York-based firm. The company also said Wednesday that it would invest in electric aviation startup Airflow and co-develop an aircraft propulsion system powered by hydrogen fuel cells.