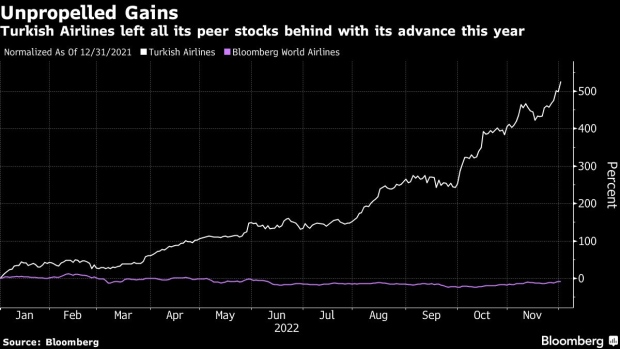 (Bloomberg) -- After a more than 500% surge, Turkey’s national carrier has contributed the most to the country’s world-leading stock rally this year. And its chairman doesn’t see gains stopping there.

Turk Hava Yollari AO, or Turkish Airlines as the company is known internationally, aims for its shares to rise to $10 (about 180 liras), Ahmet Bolat told group of reporters in Miami, 50% above Wednesday’s closing price. He didn’t give a timeframe for the goal, according to a report in Milliyet newspaper.

Turkish Airlines has provided the biggest thrust to this year’s 172% gain in the Borsa 100 Index, which leads the world in both local currency and dollar terms. Its 523% increase is also the most among global airlines.

The stock has been boosted as Turkey’s plunging currency has added to the country’s allure as a top destination for foreign travelers. According to state-run Anadolu Agency, Turkey is targeting $50 billion in tourism revenue next year, up from $41 billion envisioned for 2022. That, coupled with a boom in freight business, has boosted optimism that Turkish Airlines would return to capacity levels seen before the pandemic.

According to Bolat, the carrier aims to double the number of US passengers visiting Turkey to 2 million, making the country the second-top destination for American citizens, after the UK.

Analysts are in accord with the chairman, whose goal for the stock is higher than the average price target of 145.57 liras, or $7.81.

For Teb Investment’s Erdem Kayli, Turkish Airlines has about 50% return potential over a 12-month horizon, “thanks to strong cash flow and a significant decline in debts.”

At ICBC Turkey Investment, analyst Burak Isyar sees passenger traffic remaining strong through the first quarter of 2023, albeit with growth slowing from this year’s pace. Beyond March, the stock may start pricing in uncertainties such as elections in Turkey and the likelihood of recession in Europe, he said.