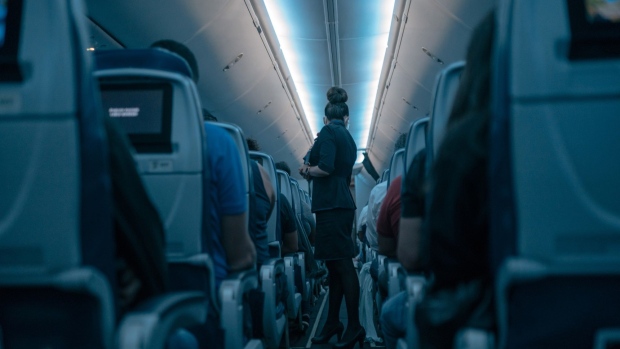 A flight attendant assists travelers on an airplane. , Bloomberg

(Bloomberg) -- The US Supreme Court refused to insulate airlines from California’s meal and rest break requirements, leaving intact a ruling that Alaska Airlines Inc. said will mean “nationwide tumult” for the industry.

Alaska and the industry say the appeals court ruling will force airlines to add extra crew to many flights at a time companies are already suffering from a labor shortage. The industry told the justices in court papers the effect will be to drive up prices, decrease services and imperil regional routes.

“California’s state-mandated breaks will make an already difficult situation completely unmanageable,” Alaska argued. “The traveling public -- and our economy -- will pay the price.”

The suing flight attendants say the industry was overstating the impact of the ruling, issued by the San Francisco-based 9th US Circuit Court of Appeals. The case centers on flights within California.

Alaska “can easily avoid all of the supposed catastrophic effects of the decision below through the simple expedient of adding an additional flight attendant to some of its longer intrastate flights so that they can rotate breaks,” argued the flight attendants, who have union backing. They said the airline had estimated that would cost only $100 per flight.

A federal trial judge awarded $1.4 million to the flight attendants for their rest-break claims as part of a broader wage-and-hour lawsuit against the airline.

California law requires that workers get a break -- during which they are off duty -- at least every five hours. The requirement is tricky for airlines because federal regulations mandate that flight attendants be ready at any time to handle emergencies and remain on duty for critical phases of flight, such as landings and takeoffs.

The Biden administration urged the Supreme Court to either reject the appeal or send the case back to the appeals court for a second look. The administration said it’s not clear the California law precludes flight attendants from being on call to handle emergencies even during their state-required breaks.

The core legal question is whether the California meal-and-break requirements run afoul of the US Airline Deregulation Act, which precludes state laws that are “related to a price, route or service of an air carrier.”

While the case involves only flight attendants, airlines say they fear it opens the door to mandatory rest breaks for pilots, who are permitted to eat and take restroom breaks during low-workload periods but on typical domestic flights are expected to be on duty at all times in the event of an emergency.