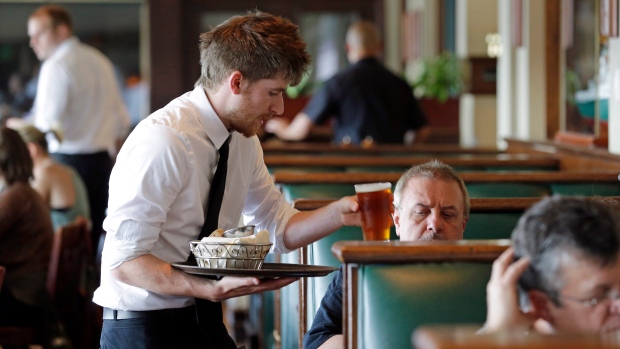 Waiter Spencer Meline serves a customer at Ivar's Acres of Clams restaurant on the Seattle waterfront Wednesday, May 14, 2014. , The Canadian Press

EDMONTON - A provincial panel will explore whether cutting the minimum wage for Alberta's alcohol servers could give them more working hours and boost their overall income with more tips.

Labour Minister Jason Copping says the panel of academics, industry leaders and workers is to report back in the new year.

The panel will also consolidate existing studies on the effects of a rise in minimum wage under Alberta's former NDP government.

Under the NDP, the minimum wage rose from $10.20 to the current rate of $15 an hour, the highest in Canada, and a reduced rate for alcohol servers was eliminated.

Premier Jason Kenney's new United Conservative government cut the minimum wage from $15 an hour to $13 for those under 18, saying the lower rate will make it easier for employers to hire and reduce Alberta's youth unemployment rate.

Kenney also said during the spring election campaign that he alcohol servers who told him the wage increase forced employers to cut their hours and that a wage cut would be more than offset by higher tip income from more hours worked.