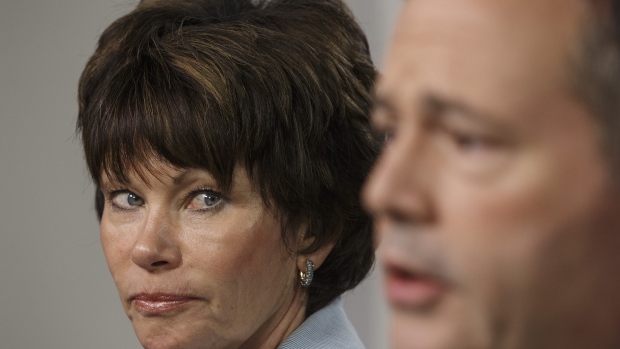 Patience in Alberta is wearing thin for a promised aid package from the federal government for the oil and gas sector, Alberta Energy Minister Sonya Savage said Tuesday.

The industry doesn't want a bailout, but instead help to cope with short-term liquidity problems caused by the plunge in global oil prices that has forced cuts in investment plans and activity levels, she said in a speech at the annual Canadian Association of Petroleum Producers symposium.

"It's taken too long," the minister said.

Federal Finance Minister Bill Morneau said last month aid for the oil sector was "hours, potentially days" away. But his department confirmed Tuesday there's still no timeline for its release, while noting that federal wage programs can be used by energy employees.

In an open letter on Monday, the Calgary-based oilfield services sector called for Ottawa to introduce a payroll relief plan and suggested it purchase their accounts receivable at a discount to give them instant cash flow to preserve jobs.

The letter signed by 13 CEOs said the federal government could collect those debts at a profit when the crisis is over.

The annual CAPP conference, held in Toronto for the past few years, is being presented as an online conference for the first time this year to help prevent the spread of the COVID-19 virus.

Global oil prices have plunged over the past month as demand has fallen because of the coronavirus at the same time that a market war between Saudi Arabia and Russia has created a flood of cheap barrels of oil.

Savage said she will participate by phone in an "OPEC-plus-plus" meeting on Thursday that could include discussion of broadening production quotas beyond OPEC and Russia to include the United States, the world's largest producer, and Canada.

"People can club each other over the head for the next six months with massive impact to the profitability of the industry or the viability of the industry, or we can take a look at doing something collaboratively with other producing regions to temporarily reduce production and avoid a massive destruction of value," he said.

"That strikes me as a reasonably prudent thing to do."

In a later presentation, Daniel Lyons, chief financial officer for Imperial Oil Ltd., took the opposite point of view.

"We don't like the government getting in and constraining production and picking winners and losers. That's not what we would advocate," he said.

He pointed out the current low oil price environment reduces the cost of feedstock for Imperial's refineries.

Despite the current price environment, CAPP CEO Tim McMillan said there's a great deal of optimism in the energy sector because three key export pipelines -- the Trans Mountain expansion, the Line 3 replacement and Keystone XL -- are in various stages of construction.

"These three projects will significantly advance Canada's ability to meet global markets with our crude oil," he said.

He added: "The Canadian oil and gas industry was the economic engine that pulled Canada out of the great recession of 2008 and we can do it again."

Last week, Calgary-based TC Energy Corp. announced it would go ahead with its long-delayed US$8-billion Keystone XL Pipeline, backed by about C$1.5 billion in equity investment by the Alberta government, along with a provincial loan guarantee.