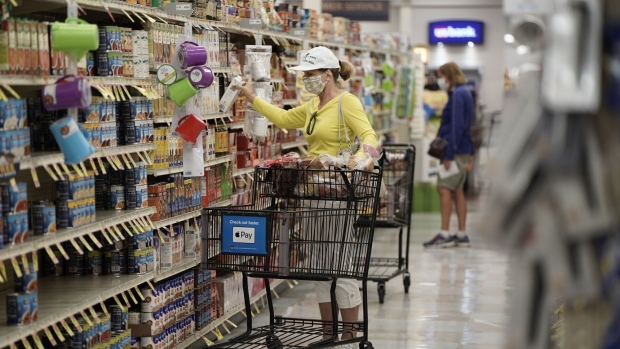 A customer wearing a protective mask shops inside an Albertsons Cos. grocery store in San Diego, California, U.S. on Monday, June 22, 2020. Existing shareholders of Albertsons Cos., including Cerberus Capital Management, are seeking as much as $1.3 billion in its U.S. initial public offering, as grocery remains of the the few businesses to get a boost from the pandemic. Photographer: Bing Guan/Bloomberg , Bloomberg

(Bloomberg) -- Albertsons Cos. shares climbed after the company posted a surprise gain in a key sales metric and raised its profit outlook.

Same-store sales rose 1.5% during the second fiscal quarter, the supermarket chain said Monday as it reported earnings, bucking Wall Street’s expectations of a 1.9% decline. Adjusted earnings for the fiscal year will be as much as $2.60 a share, up 30 cents from the previous forecast.

Albertsons is benefiting from buoyant consumer spending as customers continue to channel much of their food budget to home-cooked meals, Chief Executive Officer Vivek Sankaran said in an interview. The company is also coaxing shoppers to spend a little more at its stores compared with those of its rivals, he said.

“Consumers are still eating a lot more at home, we see those patterns seem to be sticking,” he said. “The second part of it is market-share growth. One metric I feel excited about is our market-share gains.”

Albertsons advanced 5.4% to $30.10 ahead of regular trading in New York. The shares climbed 62% this year through Oct. 15, six times the gain of an S&P index composed of five other sellers of food and staples.

At Albertsons, adjusted earnings rose to 64 cents a share in the quarter ending Sept. 11, compared with the 46-cent average of analyst estimates compiled by Bloomberg. Sales increased 4.7% to $16.5 billion. Analysts had predicted $15.9 billion.

The Boise, Idaho-based retailer raised its quarterly dividend to 12 cents a share from 10 cents.