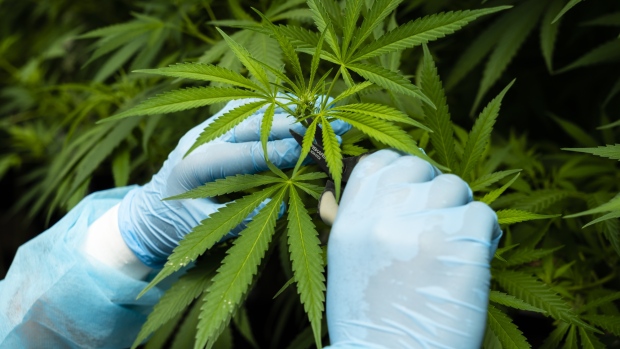 A worker trims cannabis plants inside a Fotmer SA greenhouse in Nueva Helvecia, Uruguay, on Tuesday, Feb. 26, 2019. In 2013 Uruguay became the first nation to legalize recreational marijuana, and now companies are looking outside their local market to turn the nation into a global medical marijuana leader. , Bloomberg

Alcanna Inc. said Monday it is spinning off its cannabis retailer division and merging it with YSS Corp. in an all-stock deal that would value the combined company at about $130 million.

The new company is expected to be renamed Nova Cannabis Inc. and will rebrand most of its retail footprint to Value Buds, a move that acknowledges the growing demand for cheaper cannabis in the Canadian recreational market.

"This new offering, new Nova Cannabis, is really laser-focused on a segment of the marketplace that's proven to exist -- and that's the value-conscious consumer," said Darren Karasiuk, who will be the chief executive officer of the combined company and is a former chief commercial officer for Aurora Cannabis  Inc., in a broadcast interview.

The deal, which is expected to close in March, will see Alcanna own 82.5 per cent of the new company, while YSS will have a 17.5 per cent ownership stake. The new company will look to uplist to the Toronto Stock Exchange once the deal closes, the companies said.

A $25-million equity financing is also planned for the new company, which would result in Alcanna's ownership stake dropping to 69.2 per cent and YSS’s stake falling to 14.7 per cent once it closes, according to Eight Capital.

The combined Nova Cannabis will operate 53 stores in Alberta, Saskatchewan, and Ontario, with another nine locations under construction.

"When you think back to the early days of legalization, it's a brand new industry and people really didn't know where it was actually going to go," Karasiuk said. "There was a lot of froth in terms of people wanting to build out the Apple store of cannabis retailing, things that are clad in marble and the like in high-rent districts. There's been a reluctance to focus on where the customer actually is."