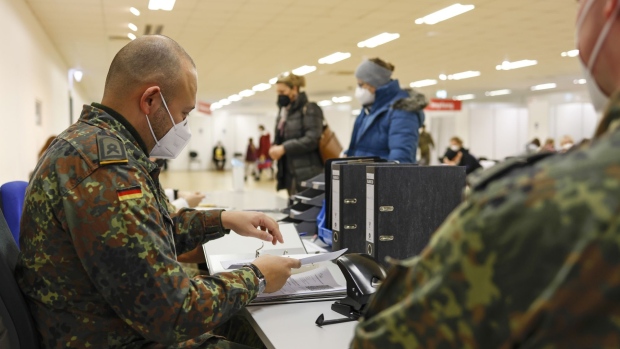 Olaf Scholz, Germany's finance minister and chancellor candidate for the Social Democratic Party (SPD), attends a statement to the media after exploratory coalition talks in Berlin, Germany, on Friday, Oct. 15, 2021. Scholz reached a milestone in his bid to succeed Angela Merkel as German chancellor by getting his potential partners close enough to enter formal negotiations for a coalition government. , Bloomberg

(Bloomberg) -- Sitting alone in a blacked-out studio, a somber soundtrack lending gravitas to his five-minute monologue, Olaf Scholz implored the people of Germany to get real and get vaccinated.

A full year after the first Covid-19 shots were administered and the world hoped to turn the corner on the pandemic, Germany finds itself overwhelmed by a fourth wave of infections more destructive than previous outbreaks.

Politicians and scientists point to the relatively low level of full protection, which stands at 69% in Germany. That means almost 17 million people age 12 and older aren’t properly vaccinated, including more than 4 million age 60 and up, the most vulnerable group.

“The line between those who suffer a mild or serious bout of Covid is no longer about old and young, but rather vaccinated and unvaccinated,” Scholz said in his Dec. 1 solo appearance on a TV program popular with younger viewers. “I take responsibility for finally taking action.”

To drive home his point, the anointed successor to Chancellor Angela Merkel issued a goal the next day of administering 30 million Covid shots by the end of the month. It’s a moonshot target, given the country’s current rate of inoculation: Germany will need to double the pace of vaccinations from this past week and maintain a faster clip than it ever mustered at the height of the vaccine drive in June.

And Scholz will take on his country’s sizable number of vaccine holdouts. To reach his goal, Scholz is tightening the screws on that particular group. He wants to exclude them from public life, from sporting events to restaurants to most shops except supermarkets or pharmacies.

A mandatory vaccination requirement will soon come up for vote in parliament, and Scholz expressed confidence the measure will pass. That would follow a similar push in neighboring Austria where a dramatic surge in cases forced the government’s hand.

Why Germany has among the highest rate of unvaccinated people in western Europe has been the subject of fierce public debate in recent weeks, driving a wedge through a society split between those worn out by lockdowns and others insisting on their right to refuse getting shots.

Some districts in the former communist east, with a more ingrained distrust of state authority and the government, are particularly exposed to unvaccinated adults. There, the states of Saxony and Thuringia have Germany’s lowest uptake -- along with the country’s highest levels of infections.

Then there’s Germany’s federal model, whereby 16 states have major sway over policy, forcing Merkel into complex negotiations and often hampering the central government’s response. The booster campaign got off to a slow and late start after much of the population was initially excluded.

There’s also a sizable subset of the population that favors a homeopathic approach to health care and views the coronavirus shots as rushed products relying on unfamiliar technologies like messenger RNA that need to demonstrate their safety over a much longer period of time. Meanwhile, the viral-vector approach used in the AstraZeneca shot has its skeptics in Germany, after official recommendations kept changing over who should receive the drug.

In a poll by market researcher Forsa in October, older people in Germany listed qualms about the amount of research into the available Covid shots as the biggest reason for their hesitancy. Yet there’s little reason to believe that clearing more traditional vaccine technologies would change behavior in the near term.

Scholz’s newfound urgency contrasts with the government narrative that until recently declared coronavirus shots a personal choice. That soft tone may have contributed to Germany’s relatively tepid uptake, and the reversal is sure to be controversial, with protests from vaccine opponents all but assured.

German Health Minister Jens Spahn sought to hammer home the drama just last month by declaring that everyone in Germany would either be recovered, vaccinated, or indeed dead by the end of the winter.

Yet experts insist that Germany will continue to face the risk of bad Covid waves through 2022 and perhaps beyond unless much more of its population gets vaccinated. As of Dec. 2, the country had given 11.3 million booster shots, the vast majority of which came in the past few weeks.

There are 46 million people who’ve received two Covid shots that are eligible for a third dose in the weeks ahead. Children younger than 12 may also get access in coming weeks after European regulators cleared the shot from Pfizer Inc. and BioNTech SE for that age group.

By comparison, the UK has already given out 19 million booster shots, about a third of the population 12 or older.

Europe’s largest economy is racing to make up for lost time following an anemic vaccination push until just a few weeks ago. Vaccination centers that were erected in record time early this year stood empty by late summer and were often dismantled, even as cases began to climb again heading into fall.

Now Scholz wants to expand the group of those eligible to give shots, adding pharmacies and specialist doctors like dentists to those administering vaccines.

Even if Germany can hit Scholz’s 30-million target -- or get somewhere close -- the impact of the push in terms of driving down infections won’t be noticeable until early next year. Meanwhile, people who’ve already caught the virus or soon get infected will further strain the country’s exhausted hospital network.

“30 million seems like a high reach, but if you don’t have this vision, you won’t achieve what you had hoped for,” said Tobias Kurth, an epidemiologist at Charité Hospital in Berlin.