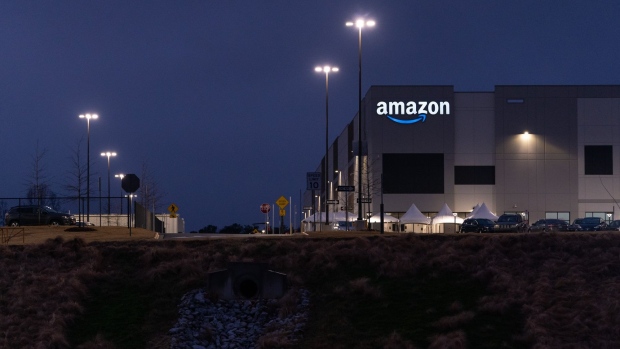 (Bloomberg) -- A top Amazon.com Inc. executive backed the effort to have a mailbox installed outside an Alabama warehouse during a recent union election, according to emails presented during a hearing about the disputed vote.

Employees lobbying the U.S. Postal Service to install the mailbox said it was a “highly visible” initiative of Dave Clark, who leads the company’s retail and logistics groups.

The mailbox outside Amazon’s Bessemer, Alabama, facility is at the center of the Retail, Wholesale and Department Store Union’s bid to overturn its election loss there. Amazon says it requested the mailbox to provide a secure and convenient means for employees to vote, but the union says the mailbox gave Amazon the ability to spy on workers as they voted and created the appearance that the retail giant was involved in conducting the election.

The National Labor Relations Board, which oversees union votes, started holding hearings last week on the RWDSU’s objections. Emails displayed during the Zoom hearing on Monday show the extent of Amazon’s campaign, which looped in senior USPS officials in Washington.

“Please let me know where we stand on this -- this is a highly visible Dave Clark initiative,” Becky Moore, a senior manager at Amazon, wrote to USPS officials in an email in late January, seeking an update on the company’s request. Another email indicated that Adam Baker, a vice president with Amazon’s transportation group, had “escalated” the request to Jacqueline Krage Strako, USPS’s chief commerce and business solutions officer, who reports to Postmaster General Louis DeJoy.

Jay Smith, director of enterprise and key accounts for the USPS, testified on Monday that the postal service had determined it could not place a blue collection box outside the warehouse on a temporary basis. Instead, it decided to install a cluster box, a rectangular steel enclosure that contains multiple locked doors, a setup often found at apartment complexes or commercial buildings. Smith said it was the first time he was aware of USPS installing a cluster box at the request of a private customer.

In early February, Smith informed Moore and Brian Palmer, a senior manager with Amazon’s public policy group in Washington, that USPS would install a cluster box outside the facility later that week. (Portions of the email exchanges, some of which were obtained in redacted form by the union through Freedom of Information Act requests, were reported last month by the Washington Post.)

Such boxes typically include an outgoing mail slot. In this case, the USPS enlarged the compartment by combining that slot with a box at the bottom right, labeled “1P,” to accommodate the larger-than-normal volume of expected mail during the vote. An Amazon employee testified last week that he saw Amazon security guards use keys to open the large box on the bottom right, labeled “1P.”

During cross-examination by a lawyer representing Amazon, Smith said the company was not given a copy of the “arrow key” necessary to open the outgoing mail compartment. He said the installation of the cluster box, which had previously sat unused, was within postal service policy.

Smith testified on Monday that Amazon, as an addressee at the site, would have had keys to open whichever of the other boxes, numbered 1 through 12, that it was assigned.

Palmer subsequently asked Smith if it would be okay to place a “vote here” sticker above the outgoing mail slot, according to an email presented on Monday. Smith testified that he told Amazon it wasn’t possible. He added that he was surprised to learn, from images published in the Washington Post, that Amazon had erected a tent over the mailbox bearing the text “Speak for yourself! Mail your ballot here.”

“I did not want to see anything else put around that box indicating that it was a vote,” Smith said.