A BNP Paribas Exane analyst slapped a sell-equivalent rating on Amazon.com Inc.’s stock, the first time in two years anyone on Wall Street has been bearish on the shares.

Amazon’s capital spending is going to be much higher than the market expects, while profit margins will be hurt by “inflation shocks,” analyst Stefan Slowinski said in a phone interview after he initiated coverage of the e-commerce giant with an underperform rating. He sees the stock dropping 17 per cent to US$2,800 over the next year.

The 57 other analysts tracked by Bloomberg who cover Amazon all have buy or equivalent ratings. Goldman Sachs Group Inc. and Bank of America Corp. named the company their top 2022 pick at the start of the year. What’s more, the average analyst target sits at a whopping US$4,102, 21 per cent above current levels.

“The stock has been underperforming big tech peers and we expect that to continue,” said Slowinski, who’s based in London and covers European and U.S. software and services companies.

The call comes in the wake of a strong rally in Amazon shares after the company announced a stock split and share buyback. The stock is up 24 per cent from a low hit this month, and on Monday it erased its losses for the year.

“With the US$10 billion buyback less than 1 per cent of its market cap, it’s really not a signal of confidence from the company,” Slowinski said by phone. “And we don’t believe it shows the willingness to drive shareholder value in the near term.” 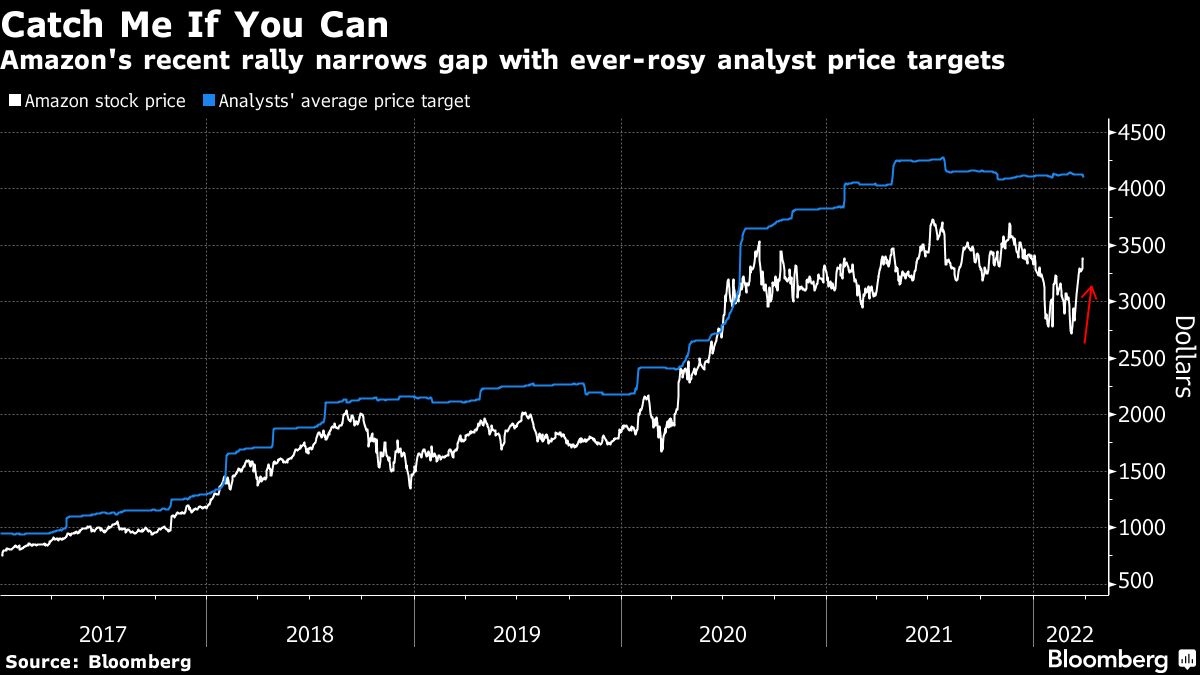 While e-commerce could suffer setbacks from rising inflation and lower consumer spending, analysts have expected Amazon’s Amazon Web Services cloud-computing business -- the most profitable segment of the company -- to offset those worries. Some have even talked up chances of it being split off as its own company.

Asked if there was some other stock to watch in e-commerce, Slowinski suggested Alphabet.

“Alphabet is developing their own e-commerce strategy,” said the analyst. “Given they have a lower valuation and can leverage their search, Android, YouTube businesses, we see Alphabet as an emerging e-commerce play.” He has an outperform recommendation on Alphabet and sees the stock gaining 14 per cent in the next year to US$3,250.