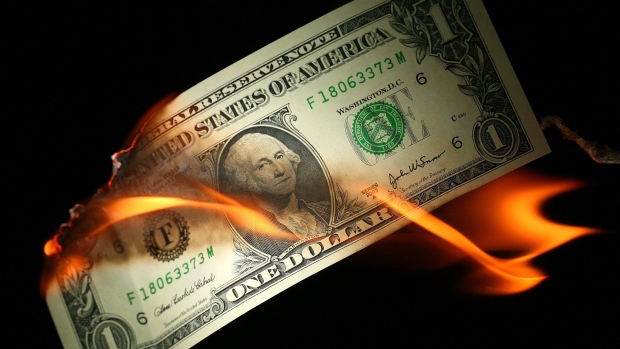 The payday-loan business was in decline. Regulators were circling, storefronts were vanishing and investors were abandoning the industry’s biggest companies en masse.

And yet today, just a few years later, many of the same subprime lenders that specialized in the debt are promoting an almost equally onerous type of credit.

It’s called the online installment loan, a form of debt with much longer maturities but often the same sort of crippling, triple-digit interest rates. If the payday loan’s target audience is the nation’s poor, then the installment loan is geared to all those working-class Americans who have seen their wages stagnate and unpaid bills pile up in the years since the Great Recession.

In just a span of five years, online installment loans have gone from being a relatively niche offering to a red-hot industry. Subprime borrowers now collectively owe about US$50 billion on installment products, according to credit reporting firm TransUnion. In the process, they’re helping transform the way that a large swathe of the country accesses debt. And they have done so without attracting the kind of public and regulatory backlash that hounded the payday loan.

“Installment loans are a cash cow for creditors, but a devastating cost to borrowers,” said Margot Saunders, senior counsel for the National Consumer Law Center, a nonprofit advocacy group.

For many families struggling with rising costs and stagnant wages, it’s a cost they’re increasingly willing to bear.

In the decade through 2018, average household incomes for those with a high school diploma have risen about 15 per cent, to roughly US$46,000, according to the latest U.S. Census Bureau data available.

Not only is that less than the 20-per-cent increase registered on a broad basket of goods over the span, but key costs that play an outsize role in middle-class budgets have increased much more: home prices are up 26 per cent, medical care 33 per cent, and college costs a whopping 45 per cent.

To keep up, Americans borrowed. A lot. Unsecured personal loans, as well as mortgage, auto, credit-card and student debt have all steadily climbed over the span.

For many payday lenders staring at encroaching regulatory restrictions and accusations of predatory lending, the working class’s growing need for credit was an opportunity to reinvent themselves.

They "saw the writing on the wall, and figured, 'let’s anticipate this and figure out how to stay in business,'" said Lisa Servon, a University of Pennsylvania professor specializing in urban poverty and author of The Unbanking of America: How the New Middle Class Survives. 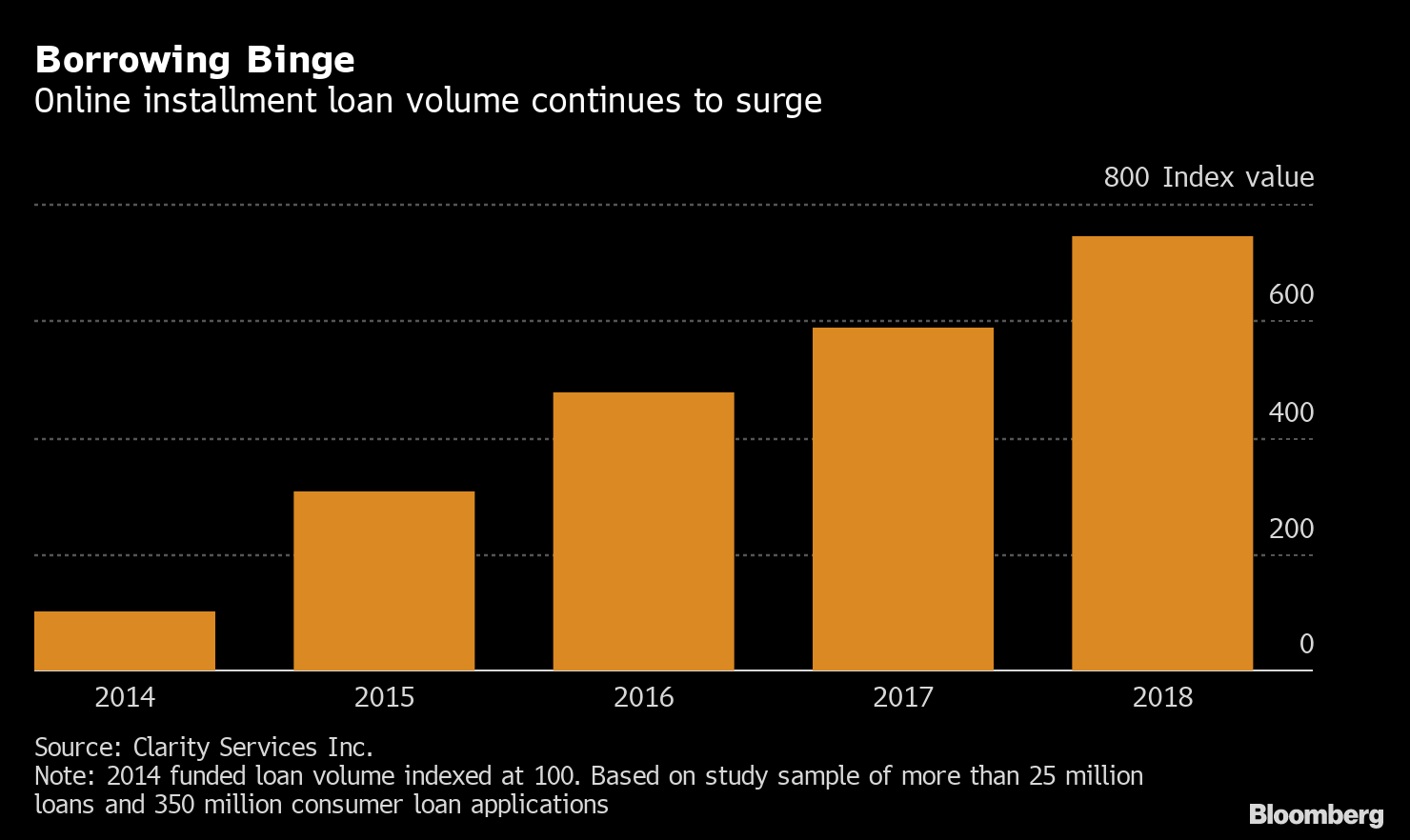 Enter the online installment loan, aimed in part at a fast expanding group of "near-prime" borrowers — those with bad, but not terrible, credit — with limited access to traditional banking options.

Ranging anywhere from US$100 to US$10,000 or more, they quickly became so popular that many alternative credit providers soon began generating the bulk of their revenue from installment rather than payday loans.

Yet the shift came with a major consequence for borrowers. By changing how customers repaid their debts, subprime lenders were able to partly circumvent growing regulatory efforts intended to prevent families from falling into debt traps built on exorbitant fees and endless renewals.

Whereas payday loans are typically paid back in one lump sum and in a matter of weeks, terms on installment loans can range anywhere from four to 60 months, ostensibly allowing borrowers to take on larger amounts of personal debt.

In states such as California and Virginia, interest-rate caps enacted years ago and meant to protect payday borrowers only applied to loans below US$2,500.

For subprime lender Enova International Inc., outstanding installment loans averaged US$2,123 in the second quarter, versus US$420 for short-term products, according to a recent regulatory filing.

Larger loans have allowed many installment lenders to charge interest rates well in the triple digits. In many states, Enova’s NetCredit platform offers annual percentage rates between 34 per cent and 155 per cent.

In fact, Virginia sued NetCredit last year for avoiding state interest-rate caps, while California Governor Gavin Newsom earlier this month signed into law a measure capping interest rates on loans between US$2,500 and US$10,000 at 36 per cent plus the Federal Reserve’s benchmark, currently at around two per cent.

A representative for Enova directed Bloomberg to the firm’s latest quarterly filings, wherein the company says that Virginia’s claims are without merit.

“The benefit of installments loans is you have more time to make the payments; the downside is the payments on these high-cost loans go exclusively towards the interest, possibly for up to the first 18 months,” the National Consumer Law Center’s Saunders said.

The industry, for its part, argues that just as with payday loans, higher interest rates are needed to counter the fact that non-prime consumers are more likely to default.

Between Enova and rival online lender Elevate Credit Inc., write offs for installment loans in the first half of the year averaged about 12 per cent of the total outstanding, well above the 3.6 per cent of the credit card industry.

“With high-cost credit, you’re only serving people that won’t qualify for other types of credit, so you’re already in a hardship situation,” said John Hecht, an analyst at Jefferies LLC. “Companies have to price for that.”

According to Elevate’s most recent quarterly financials, net charge offs for their Rise installment loan product equaled about 45 per cent of the revenue those loans generated.

“By the time they get to be our customers, they may have hit that speed bump at least once; often they will have run into medical bills or a job loss, which knocks out their ability to get other forms of credit,” said Jonathan Walker, who heads Elevate’s Center for the New Middle Class, a research and data gathering unit that analyzes the borrowing habits of the more than 150 million Americans without prime credit scores.

Elevate’s average online subprime installment loan customer has an annual income of about US$52,000. About 80 per cent have been to college and 30 per cent own a home, according to Walker. More than 10 per cent of the company’s core customer base makes over US$100,000 a year.

“Ten years ago it was payday loans or nothing, and today there has been a lot of innovation to meet the consumer where they are,” Walker said.

The surging popularity of online installment loans, combined with a growing ability to tap into big data to better screen customers, has helped boost the fortunes of many subprime lenders. The Trump administration’s decision earlier this year to delay and potentially weaken planned restrictions on payday lending that were announced in 2016 has also bolstered the industry’s outlook.

Elevate’s annual revenue rose about 1,000 per cent in the five years through December to US$787 million, while Enova has seen growth of 46 per cent in the span to US$1.1 billion, according to data compiled by Bloomberg.

Subprime installment loans are now being bundled into securities for sale to bond investors, providing issuers an even lower cost of capital and expanded investor base. Earlier this month Enova priced its second-ever term securitization backed by NetCredit loans. Its debut asset-backed security issued a year ago contained loans with annual interest rates as high as 100 per cent.

The bulk of their growth has been fueled by the middle class.

About 45 per cent of online installment borrowers in 2018 reported annual income over US$40,000, according to data from Experian Plc unit Clarity Services, based on a study sample of more than 350 million consumer loan applications and 25 million loans over the period. Roughly 15 per cent have annual incomes between US$50,000 and US$60,000, and around 13 per cent have incomes above US$60,000.

For Tiffany Poole, a personal bankruptcy lawyer at Poole, Mensinger, Cutrona & Ellsworth-Aults in Wilmington, Delaware, middle America’s growing dependency on credit has fuelled a marked shift in the types of clients who come through her door.

“When I first started, most filings were from the lower class, but now I have people who are middle class and upper-middle class, and the debts are getting larger,” said Poole, who’s been practicing law for two decades. “Generally the debtors have more than one of these loans listed as creditors.”

--With assistance from Shahien Nasiripour and Steven Church.